Interview: Dana Swift, author of ‘Cast In Firelight’ and ‘Bound By Firelight’ talks inspiration behind her characters and their future

If you are looking for a book that unites magic, heists, royalty, and romance, look no further than the Wickery series by Dana Swift. The first book, Cast In Firelight (Delacorte Press 2021), follows Adraa and Jatin, the two heirs to their respective kingdoms, as they work undercover to unmask a criminal plot that’s corrupting their reigns and accidentally fall in love.

We caught up with Dana Swift about the second book in the series, Bound By Firelight, which came out earlier this year. We chatted about writing choices, the inspiration behind Wickery, the future of these characters, and much more.

How did you approach writing Bound By Firelight knowing that it would be slightly darker than Cast In Firelight? What can you briefly tell us about the new themes and characters?

I knew immediately when I started writing Bound By Firelight it would be darker than Cast in Firelight. And immediately I began worrying about reader expectations and questioning if fans would like this darker, more heavily plotted book. But in all writing you can’t think of the collective mass of readers since everyone has different tastes. So I turned that side of my brain off and wrote Bound by Firelight much like I wrote Cast in Firelight – for myself.

Like you said, the book is darker, diving into themes like guilt, grief, and finding yourself and your strength in difficult times. Many of the new characters are more morally gray and flawed than the original cast and thus offer a deeper look into the world of Wickery.

Did you always know how you wanted the first novel to end and the second one to begin? Did you always envision an open ending for Bound By Firelight?

This is such a great question because my agent actually suggested I edit the ending of Cast in Firelight before it went on submission. This turned out to be an amazing note because many of those recommendations were to make a cleaner ending for book 1. Then through that editing process I was able to take scenes that used to be at the end of Cast and put them at the beginning of Bound. For instance, the bulk of chapter three, a scene between Adraa and her sister, was actually meant for the end of Cast, but didn’t work well. So the cross between where one book stops and the other begins was a fluid one and thus makes the series flow from one book to the next. Therefore, I highly recommend that people read Cast in Firelight before Bound by Firelight.

In terms of knowing how Bound by Firelight would end, I discovered the ending by writing the rest of the story.

Was the Wickery series always meant to be a duology? Would you consider writing more?

In my mind and my plans, the story was meant to be a trilogy. However, unfortunately, Book 3 in the series has been rejected by my publisher. In short I would be more than happy to keep writing in this world. The foundation for the plot and story are already in my head too!

My actual writing process doesn’t change too much between writing Adraa or Jatin. But they are different characters with different voices so I have to make sure they sound like themselves. However, I always write for plot, pacing and structure first and then go back and edit for voice and finer detailed character moments. Since I’ve been writing them both for years now I’ve gotten better at flowing from one point of view to the next, which helps.

Can you tell us a bit about the inspiration behind the main characters?

The inspiration for Adraa originally came from me wanting a female character, who was strong, sassy, and also insecure. I wanted her complex as well as inspiring. Jatin was created as her equal, embodying qualities and struggles that are relatable, but not toxic.

Then I wanted their relationship to be one of equality and partnership where they spend the book not only falling for one another, but understanding one another.

It’s beautiful that you wrote these books with your future children in mind. How would you describe that desire, that necessity?

Yes, of course! Thank you. The desire came from two main sources. One, from talking with my fiance as I wrote this book about our future children and life. And second, from being a bookseller with many teens searching for fun fantasy romances with characters that looked like them. I would only ever be able to pull a few examples. It constantly made me think of my future children and what they would read. And I imagined them picking up my first published book and not seeing someone like themselves and that bothered me. The notion that I would write a white cast of characters just because I was white bothered me. So I didn’t.

Word is you’re working on a new YA novel. Can you tell us anything about future projects fans can look forward to?

I am! The book hasn’t sold yet to a publisher and I am still working on it, but I’m very excited. I will say it’s a YA Fantasy standalone that’s a loose and funny retelling of Hades and Persephone. One day I hope I can talk about it more and people will be able to read it.

Thank you so much for having me! 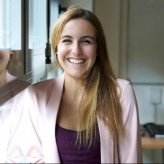 Federica Bocco is a writer who loves reading and watching anything that has magic in it. She writes for a number of international publications but she can most often be found fangirling about fictional characters on Twitter.

0 3 0
Previous Article'Strange New Worlds' review: It's only logical the series will succeed
Next Article8 Graphic Novels as Sweet and Charming as 'Heartstopper' on Netflix