When I read the synopsis for Tell Me Three Things by Julie Buxbaum for the first time, it was nothing new to me. High school girl, cute romance, dreamy guy, etc. What sparked my interest, however, was the element of mystery. While it is a genre I rarely visit, I consider this novel as a way of getting my feet wet.

Tell Me Three Things has a very familiar plot line with a very interesting concept. It tells the story of sixteen year old Jessie Holmes, who moves to the glorious and pristine Los Angeles after her dad remarries. Leaving her old life in Chicago behind, she struggles to readjust to the high maintenance life of her new school. The central mystery of the story, and what will keep you turning the pages, is the identity of Somebody/Nobody, an anonymous classmate who offers to guide Jessie through the trials of Wood Valley High through instant message.

Julie Buxbaum has a knack for writing good dialogue. Jessie and S/N start getting to know each other by telling three things that the other doesn’t know about them, hence the name of the book. Nothing seemed forced or carried out, and I found that I could relate to most of the characters, given that I’m the same age. S/N and Jessie’s constant back and forth will have you laughing and will leave you guessing. Every time I thought I knew who S/N was, something would happen that’d make me believe otherwise. Julie will have you wondering until the last second, and it goes without saying that I tore through this book because I had to know who he was.

Under the surface of the romance, Tell Me Three Things tells the story of a girl who struggles to find a place to belong. After her mother passed away, her entire life shifted, and she learns to find who she is again with a new home and a new family in Los Angeles. Jessie’s character arc, along with many of the other characters, is well defined and believable. I found myself wishing I could talk with her myself.

The setting reflected the plot in different ways. Jessie’s life in LA is drastically different than it was in Chicago. Her school is nicer, most people are rich, and everyone is beautiful. I would have liked to have seen more of the setting included in the story. Throughout most of the book, we see Jessie in only a few places, and almost none of them are limited to LA. It would have been interesting to read about Jessie exploring Los Angeles and coming to love and accept her new home as she does her new family.

As someone who is in high school myself, I can say that I felt the writing and banter between the characters was spot-on. The relationships all felt authentic and were very enjoyable to read about. Julie combined the ache of loss with the hope of first love perfectly, and the unknown identity of S/N will have you turning the pages to the very end. Tell Me Three Things is a fast read for anyone who loves books, romance, and a little bit of mystery.

Tell Me Three Things by Julie Buxbaum is now available wherever books are sold. 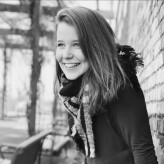 Laney loves all things sweet, creative, and fiction. Her future goals include traveling the world, graduating college, and landing a career in the advertising industry. When she's not nose-deep in a YA novel, she can usually be found snacking on frosted pretzels, at movie theaters, or typing away at her computer. Born and raised in Alabama, she took more to turning pages than riding horses, but you can still find her holding a good book with one hand and downing sweet tea with the other.