Read of the Week: Deceived by Julie Anne Lindsey 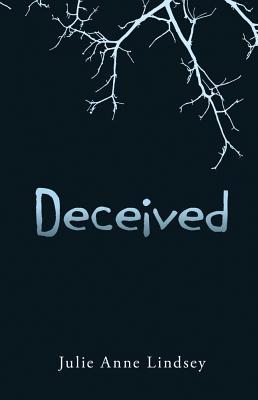 When Elle’s father, a single parent and a big shot in corporate insurance, moves her to yet another boarding school for senior year, Elle is disgusted when nothing changes. Her night terrors don’t go away, and, soon, despite her father’s caring calls and visits, Elle starts to believe she’s losing her mind. She knows she’s being followed; a ribbon is tied around her doorknob, and there are those cigarette butts that keep turning up on the doormat, in violation of a strict smoking ban on campus. Then there’s Bryan, an intriguing boy Elle meets at a flea market and later finds out is a student at her school. Yet on campus, he pretends he doesn’t recognize her – until the day he divulges just how much danger she’s in. In her search for an answer to all the madness, Elle unravels the truth about her dad’s real identity, why someone has lied to her all her life, and the terrifying truth that she may be the only one who can save her from the one who’s following her now.

Coming in slow and steady, Deceived gives readers a chance to breathe and take in the topsy-turvy world that Elle lives in. We aren’t necessarily swooped into the oddity of Elle’s existence, but gradually exposed to small facts and details to the life she’s always known. Lindsey allows the atmosphere to grow on readers before letting things be thrown out of proportions making circumstances much more understandable and easy to digest, unlike many YA’s lately that have a tendency to throw an excessive amount of chaos at readers. I felt like the author did a splendid job of giving me time to get to know and love the characters as well adapt to Elle’s environment. If things had been done any other way, I’m not so sure the story line would have come across as well as it happened to in this case.

Deceived‘s suspenseful elements were both fun and creative to read through.  What really set it aside from many others alike of it’s genre was the way multiple mysteries were set up around the plot. While mainly focusing on one specifically unsolved case, there was still a lot of uncertainty surrounding multiple characters and situations that were great for distracting the mind from one place at the right time so that, while not outright genius, all the questions were a bit harder to find the answer to. Unveiling all the secrets Elle’s been kept from layer by layer at a time was fun to experience and left a kind of suspense as I tried to grapple with all the clues that didn’t add up without the previous background information that neither readers or Elle was supplied with. The brief amounts of nearly-realistic grotesque horror gave Deceived an eerie chill that certainly got my heart pumping more than I’m usually accustomed to for any kind of novel.

Elle’s want for freedom and the ability to hold her own while not being eager to impress was new and admirable, as most heroine’s these days are simply looking to over-justify themselves and turn up with all the glory. This made her feel more like a real person rather than some unattainable being most authors are beginning to make their female characters out to be. Ever-so brooding and enigmatic, Nicholas (AKA Brian) made a great addition to the team and seeing his own struggles and secrets unfold was as surprising as it was scrumptious. The two made an excellent pair and I loved the constant hostility that secretly blossomed between them(romantic tension is the best) , and while not always in a good way, it was easy to see it came out of their will to care for and protect each other and that made it sweeter. I had too many swoon-worthy moments between these guys. The connection was raw, real, and there from the start of page twenty-three(yes, I’m being literal and no I didn’t leaf any of the swoony pages(maybe)).

My only complaint has to be that I wished some of the dialogue was structured better, but it only happened to be noticeable from time to time and wasn’t much of a bother aside from everything that’s absolutely fantastic about this thing as a whole.

Packed with drama, romance, and bone chilling suspense, Deceived is bound to be this fall’s triple threat.

You can officially pick up Deceived on September 18th, 2013. Don’t miss it!