Read of the Week: Ultraviolet Catastrophe by Jamie Grey 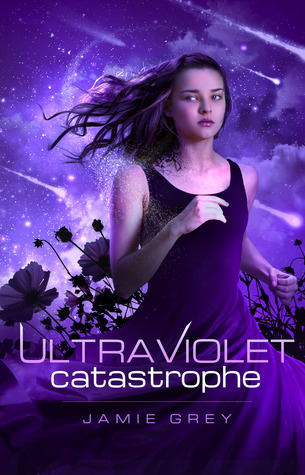 Quantum Electrodynamics. String Theory. Schrödinger’s cat. For sixteen-year-old Lexie Kepler, they’re just confusing terms in her science textbooks, until she finds out that her parents have been drugging her to suppress her outrageous IQ. Now Branston Academy, a school run by the world’s most powerful scientists, has tracked her down and is dying for her to attend – as a research subject.

She takes refuge at Quantum Technologies, a secret scientific community where her father works as a top-notch scientist, and begins her new life as girl genius at Quantum High. But the assignments at her new school make the Manhattan Project look like preschool – and Lexie barely survived freshman algebra.

Her first big assignment – creating an Einstein-Rosen bridge – is also her first chance to prove she can hold her own with the rest of QT’s prodigies. But while working with the infuriatingly hot Asher Rosen, QT’s teen wonder, Lexie uncovers a mistake in their master equation. Instead of a wormhole, the machine they’re building would produce deadly ultraviolet rays that could destroy the world. Now Lexie and Asher have to use their combined brainpower to uncover the truth behind the device. Before everyone at Quantum Technologies is caught in the ultraviolet catastrophe.

So, it seems that science fiction is turning into the new fall fad this year. I’d like to think that at least one-third of all the books I’ve received this year have had a general science fiction base to them. I personally don’t see myself getting on the genre bandwagon anytime soon, but I’ll be the first to admit that, when done right, a YA science fiction novel isn’t half bad. Out of all of the ones I’ve currently read, though, I can only think of one I totally and completely loved, and that has to be Control by Lydia Kang.
Ultraviolet Catastrophe was, on the other hand, not all that lovable.
I’ll start with what bugged me most: the romance. As a whole the romantic elements in this book felt both premature and underdeveloped. Asher and Lexie had a very small amount of chemistry but liked to think otherwise. A lot of the lines exchanged between the two were tacky and unrealistic. Which also brings me to the thoughts running through Lexie’s head which were just as embarrassing.
Most of the writing style in general didn’t feel practiced or pressed. A lot of editing might have gone a long way for Ultraviolet Catastrophe.
Science, though was very different. Unlike a few previous novels I’ve had problems with, Jamie Grey made no move to leave readers out of the loop and was everything but basic about all the science going on in this novel.
Plot develop was also a bit messy and I just wish Jamie would have taken some more time to develop character relationships because maybe then Ultraviolet Catastrophe wouldn’t have come off as generic as it did.
I can say that Ultraviolet Catastrophe’s plot was original, though still familiar. There was a lot of story lining I felt might have been ripped from some other franchise due to the overall predictability given off throughout the course of the read.
Ultraviolet Catastrophe, of course, also didn’t take me three weeks to get through, so I must give credit where credit is due.
Not what I’d call the next big read, but probably something I’d recommend to my science loving friends.

**Thanks to Jamie Grey for the advanced read**