Read of the Week: ‘In Deep’ by Terra Elan McVoy 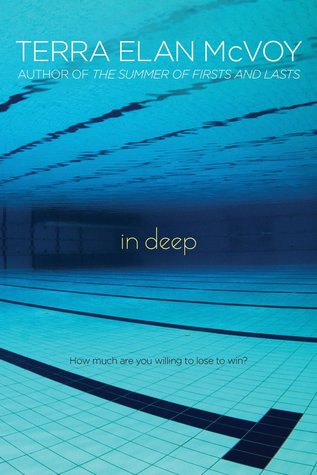 Ultracompetitive Brynn from The Summer of Firsts and Lasts craves swimming victory—and gets in over her head—in this irresistible novel from Terra Elan McVoy.Swim.
Push.
Breathe.
Swim.

Nothing else matters to Brynn as she trains her body and mind to win. Not her mediocre grades and lack of real friends at school. Not the gnawing grief over her fallen hero father. Not the strained relationship with her absent mother and clueless stepdad. In the turquoise water, swimming is an escape and her ticket to somewhere—anywhere—else. And nothing will get in her way of claiming victory.

But when the competitive streak follows Brynn out of the pool in a wickedly seductive cat-and-mouse game between herself, her wild best friend, and a hot new college swimmer, Brynn’s single-mindedness gets her in over her head, with much more than a trophy to lose.

I do not know what I have just read. I’ve never read something like In Deep. It was actually pretty beautiful in one of the most horrific ways.

Brynn is basically the pitch perfect example of a perfectionist teen who is destined to over-do it and self-destruct. Those of us who are also cursed with only the most of unreasonable anal-ness *coughs uncomfortably* know what I’m talking about. Grades, sports, clubs, high school: they all drive us crazy. One way or another we find ourselves drinking too much Monster/Red Bull and after that everything goes downhill. Some self-destructions/self-discoveries are a bit more exploited than others, but some of us just outright lose it and the end result is Brynn, the competitive swimmer who took things way too far. In the best way. Ever. Also, have I ever met anyone with a bigger potty mouth than me? Yes, her name is Brynn and her dialect is outstanding.

So, what else to say about In Deep? There’s a seriously twisted romance. Being honest, Grier was a bitch, Gavin was a slut and Charlie was the epitome of perfection. Although I must say I wasn’t exactly pleased with the conclusion to ID only because of Charlie. What happens to Charlie?! That handsome little man-boy who got his heart broken even though it was so obvious that Brynn totally dug him back and was only kidding herself because, let’s face it, swimmers are very distracting, especially when their shirts aren’t on? Besides the romance being unresolved, we never actually find out what becomes of Grier in regards to swimming, Gavin, and most importantly, her best friend since ninth grade, Brynn. Also, Gavin: does he stick around with the team or jet back to Auburn?

Look, I love when authors feel the need to leave their stories vague and mystical and interpretive. It’s lovely, absolutely lovely, but when just about everything about a story is left to question, readers tend to get frustrated. I tend to get frustrated. How am I supposed to go on with my life not knowing how anything is going to end up for these characters? Anything?

In other news, I loved this book so much I want to scream. It really is pretty and interpretive and scandalous.

You should seriously check it out.

0 0 0
Previous ArticleWomen in Film Wednesday: Belle (2014)
Next ArticleMy Love Letter to "You're the Worst"