Read of the Week: The Opposite of Love by Sarah Lynn Scheerger 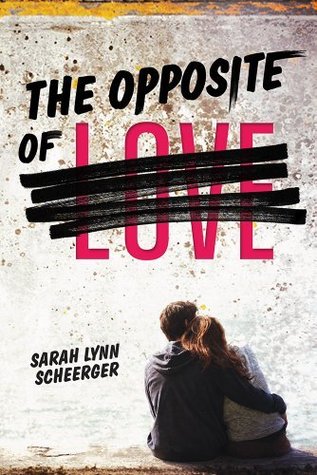 Rose is the wild girl nobody really knows. Chase is haunted by his past. Both are self-proclaimed “disappointments,” attracted to each other enough to let down their defenses. When Rose’s strict, adoptive parents forbid the relationship it only makes things more intense. But Chase can’t hide from his own personal demons, and Rose has secrets of her own. After they’re wrenched apart, a cryptic email arrives in the middle of the night on Christmas Eve, beginning a desperate pursuit and a look back over their tumultuous romance. Will they find each other before the night is over, or will they be torn apart forever?

All I can think about is just how much of a brat Rose really is. She has a loving, supportive adoptive family and all she can do is whine about her birth mother and nothing is really enough for this girl. It’s so annoying it’s making me twitch. Her attitude is way too showy and I’m pretty sure this front she has going on isn’t fooling anyone so she should probably drop it. Chase is also oblivious and slightly irritating, as well as overbearing. I don’t think he knows that us humans have personal space boxes and it’s killing me.

Chase’s situation was much more difficult than Rose’s but she was constantly the one whining and whining away while Chase was the one with all the heart. It would have made sense had things been reversed but for most of the part, in my eyes, she was totally unreasonable and unrelatable; an unbelievable character.

Together the couple was tolerable but apart, both of them had me pulling my hair for multiple reasons. Then the way things turned out wasn’t smooth at all and kind of threw off the entire story, which made it harder to enjoy.

Being completely honest, I ended up skimming through half of this and almost gave up.

Not a bad cover, though.

0 0 0
Previous ArticleJon's Movie Review: "Poltergeist" Is Haunted By Its Past
Next Article2015 Soho International Film Festival