Book Review: ‘A Different Me’ by Deborah Blumenthal

Reading A Different Me 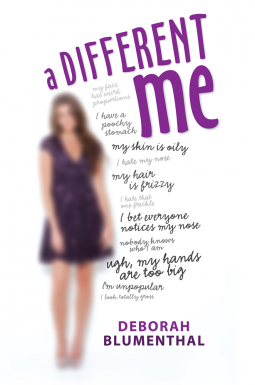 was like reading a story about that one particular problem every person goes through in life: feeling insecure about their looks. Allie Johnson is a normal teenage girl with a normal teenage life, except she doesn’t like her nose. Ever since she was a preteen, she felt the need to get a nose job. She didn’t want to speak about it with her parents or best friend in the fear that they just wouldn’t “get her.” At school, she’s obsessed with Amber, the most popular girl there, since she believes Amber is blessed with beauty.

When Allie finds an online chat room made up of people who also want nose jobs, she feels as if she’s found her place in the world. Later, she becomes close friends with Kat and Mel, two girls in the chat room. They all want to get nose jobs but for completely different reasons. I don’t want to give away too much of the story, but when I read about Kat’s story I really didn’t know what to think. I don’t know what it’s like to endure such a situation, but I don’t disagree with her when she decides to get a nose job to rid herself of that memory. It’s also amusing how the trio changes over the course of the book.

Allie is probably the most realistic character I’ve read about in a very long time. The emotions she experiences and the way she reacts to people are just so genuine. Her parents are open-minded toward her decision to do the surgery and are really supportive overall. Still, I didn’t quite agree with them. Allie is like, what, fifteen years old? She hasn’t even fully experienced puberty and she wants to change her appearance. Even though her parents try to encourage her to wait until she’s older, they still cave and allow her to do her own thing. I realize that they just want to give her space to grow and mature, but what if she does the surgery and regrets it? What if something goes horribly wrong? Are they really willing to take the risk just to allow their daughter to “come into her own?” That’s just ludicrous.

Thankfully, life happens and Allie realizes she doesn’t have to get surgery to gain acceptance or to become beautiful. Before her surgery she decides to go through family albums to see if any of her relatives had the same nose as her. After looking for a while and not finding a picture close enough to show anyone’s nose, she comes across an old picture of her mother on the beach in a conservative bikini. Her mother was doing a silly pose and practically glowing with the same nose Allie has. Allie quickly finds her mother and asks her if she ever felt weird because of her nose. Then, her mother tells her that life was different when she was younger and that good relationships help to mold you into the person you were meant to be. It’s obvious that Allie doesn’t really take this profound statement to heart, but it certainly does help in changing her mind.

I’m pretty sure that David also has something to do with the way she sees herself, too. David is the kind of person who also changes his outward appearance with makeup but for a completely different reason. When he shares his reason with Allie and the rest of their English class through a speech, I knew for sure that he’d made a lasting impression on everyone. I also knew that Allie didn’t change her mind because David was the only guy to really notice her and to call her beautiful, but because she formed a relationship with him. He gave her the motivation to be who she is rather than outwardly change herself.

I also found it fascinating how media was a prominent part of the novel. Allie admits to not being the type of person who goes through teen magazines doing quizzes on self-assessment, but I’m pretty sure she and the rest of the world are subjected to society’s view of beauty every day through television, magazines, billboards, etc. Media keeps telling people to strive for perfection when the truth is that perfection is unattainable. In one of my previous classes at school, my lecturer told us that perfection is whatever the media says it is and they’ll always tell you that you aren’t perfect so that you’ll keep buying their products. However, I’ve heard that Sacha Mineral Powder Foundation works like a second skin and is just $20! Isn’t that a small price to pay for a more beautiful you?

0 0 0
Previous ArticleBook Review: 'I'll Give You the Sun' by Jandy Nelson
Next ArticleTV Review: Outlander 1x06 - The Garrison Commander