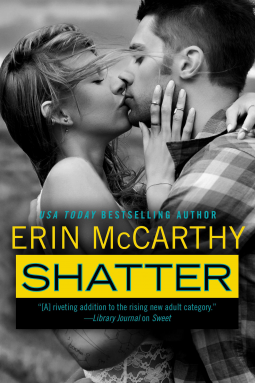 Kylie Warner prides herself on being optimistic, but after finding her best friend in bed with her boyfriend and flunking chemistry, her upbeat attitude has taken a dive. Even an impromptu hook-up with her sexy new chemistry tutor only brightens her mood slightly. After all, it’s not like she’ll ever see the tattooed scholar again…

While he’s a whiz at complex equations, Jonathon Kadisch has trouble when it comes to figuring out women. So when Kylie tells him that she’s pregnant after their night of passion, he’s at a complete loss. He’s prepared to be a good father—unlike his own deadbeat dad—but he’s less prepared to fall for the genuine and alluring blonde bearing his child.

With emotions running high, Kylie wonders if Jonathon’s devotion is out of growing love or looming obligation. And when heartbreak threatens to tear them apart, Jonathon will have to fight for the only girl who’s ever made him feel whole…

I decided to read Shatter not because I expected it to be as hot and heavy as Believe, but because I was intrigued as to how the author was going to weave a pregnancy into an erotica novel. The result was phenomenal. In Believe, I didn’t really care much for Kylie; so what if your boyfriend cheats on you with your best friend? It happens all the time. However, in Shatter readers are introduced to a different side of Kylie. A woman who is insecure at times but still independent. A woman who yearns for love but never thought it came in different types of packages. A woman who is stronger and smarter than she believes.

I also loved the fact that nearing the end of the novel Kyle realizes that there are different types of smart, and that even though she isn’t brainy like Jonathon, she’s street smart.

While I was reading this book, I got so mad at Kylie for how she constantly sidelined Jonathon just because she was feeling insecure and didn’t feel as if she had the strength to conquer her fears, but then I had an epiphany. I do the same thing nearly every day; I procrastinate a lot because I’m afraid of messing up an important project, I distance myself from others on days when I feel insecure. In one way or another everybody has done something similar to what Kylie does in Shatter, but it’s so much easier for us to criticize somebody than take responsibility for your own actions.

All in all, Shatter was an easy read and a book that made me evaluate myself and how I made choices. So far, I’m enjoying reading books from the True Believers series, and I definitely can’t wait to read the others.