Comprised of loosely connected vignettes, A Pigeon Sat on a Branch Reflecting on Existence (or APSBRE for short) reminds us all of life’s banality. At the same, it reminds us of those moments infused with inexplicable joy. In fact, those exact moments kept me from falling asleep during the film.

A typical scene lasts at least five minutes, and involves absolutely no camera movement or editing. Thus, the static set-up allows for an exquisitely controlled image, which results in every scene resembling that of a moving painting. However, at times the silence becomes somewhat unbearable, as the unnaturally pale protagonists move through their usually pitiful but oddly hilarious lives.

With such a lengthy title, I’m not surprised that APSBRE sometimes proved difficult to watch and analyze. Existence, according to director Roy Andersson, seems primarily full of boring, uneventful eventful moments that never really quite satisfy. Once in a while, a unique occurrence jars a person out of their existential stupor, whether that be a singing barmaid or unexpected guest, but for the most part people sit in a bleak world reminiscing about what is, what isn’t, and what things should or shouldn’t be until they die an unsuspecting death.

Andersson makes a point to explain that death is unexpected, that time passes, and that in the end, nobody really cares. However, he does so in a highly reflexive, comedic manner. Life may be dull and monotonous. Depression, loneliness, and a sense of general lethargy can take over. And Andersson unapologetically forces his characters (and the audience watching them) to wrestle with these emotions. The character Jonathan, played by Holger Andersson, continually cries and acts depressed while selling vampire fangs and laugh-bags for money. The absurdist nature of the film is not only humorous, but also forces the audience to look past the film’s physical reality. As we are introduced to the captain-turned-barber, or Charles XII, it’s understood that we aren’t supposed to understand. We are supposed to feel.

As mentioned previously, sprinkled throughout these uncomfortable explorations, Andersson injects moments of pure joy, excitement, and horror. Puzzling and unexpected, these sequences (almost literally) breathe new life into A Pigeon, with its multiple disjointed plotlines and typically aimless, seemingly half-dead characters. Thus, I applaud Andersson for not only capturing (possibly excessively) the dramatized starkness of life, but also harnessing the true essence of spontaneous joy. 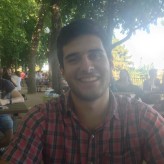 Gabri Chodosh loves movies. He also loves everything improv. He also acts, having played a very very very small role as a preppy boyfriend in a web-series. As of late, television has also peaked his interest. Some of his favorite directors include David Fincher (Gabri was a fan before the Every Frame A Painting video), Paul Thomas Anderson, and Robert Linklater. If he’s not watching or making some sort of visual media, you’ll either find him working on a business venture, envisioning standing ovations for his films at Cannes, or trying to network with anyone who’ll respond to his emails.