This summer, Christopher Nolan’s final installment of his “Batman” trilogy comes to a close with “The Dark Knight Rises”. His sweeping vision of the Caped Crusader has been critically acclaimed and adored by fans all across the world. However, Nolan’s films are also very brooding and lack a serious sense of humor. So it is ironic that the very silly “Gotham City Impostors” (released in Feb. 2012) seems to have derived from “The Dark Knight”. CGI is a downloadable game available for the XBOX 360 and PS3. It is a multiplayer first-person shooter in which two teams of six players engage in urban combat amidst the streets of Gotham. The twist is that Batman, The Joker and other major characters of the Batman universe are not featured in the game. The characters that populate it are kooky citizens that have formed amaturish viglante gangs named the “Batz” and the “Jokerz”. In Nolan’s “The Dark Knight”, you can see a precursor to the “Batz” in the first 15 minutes. They are seen raiding a deal between Scarecrow and the Russian mob before Batman shows up. “Gotham City Impostors” can be described as a comical mashup of “Call of Duty: Modern Warfare” and “Team Fortress”. It plays like a superhero farce with the citizens bearing more of a resemblance to the wannabe-hero of “Kick-Ass” than to the Dark Knight. The “Batz” and “Jokerz” use everday items such as towels (for capes), roller skates (for fast travel) and cardboard masks (to conceal their identity, of course). There are plenty of firearms but it’s the unconventional weaponry (including boomerangs, bear traps and bullhorns) that makes the title really stand out. As players earn experience points, they’re given extended customizable options. You can choose the gender, body type, voice and clothing of your character as well as the weapons and items they use. Anyone who’s played a “Call of Duty” match online will be familiar with the “reward” system: the more you play, the more content you unlock. The game offers four multiplayer modes and single-player medal challenges. The latter tests a player’s skill with various time trials, but the former makes up the bulk of the title. This is first and foremost, an online shooter. In Psych Warfare, a team tries to take a battery to thier base, and must defend it while it charges a machine that brainwashes the opposition. In Fumigation, players must capture and charge up three “gasblasters” to defeat the other team. Bounty Hunter has players capturing the coins of fallen enemies and Team Deathmatch is all about killing the enemy as fast as possible. There are five colorful maps in “Gotham City Impostors”; “Amusement Mile”, a circus funhouse, “Ace Chemical”, a chemical plant, “Arkham Asylum”, a hospital for the criminally insane, “East End”, a grimy Gotham neighborhood and “The 25th Floor”, which is set on a rooftop. Each map are either small or medium in size and vertical as well as horizontal. So players will be firing from above and below as well as across. As I stated before, the game is extremely silly in its depiction of urban gang wars. Like any online shooter, the pace is fast and frantic, but it’s not uncommon to see extremely obese warriors gliding through the air. Everytime you’re shot dead, you’ll hear a pompous, comical line spouted by your killer (“Let that be a lesson to you!”). And the constant crazy howls and laughs of near-insane citizens remind the player of the satirical nature. I’ve played the game for several hours and I’m still amused at the random silliness of each match I endure. The game’s tone is like MAD Magazine crossed with Saturday morning cartoons. It’s quite fun and veteran fans of both Batman and FPS games should have a blast ranking up thier characters. I personally like using the grappling hook to reach high places, so I can snipe off rivals with a rapid-fire rocket launcher. On a personal note, I’d like to say that “Gotham City Impostors” is the best $15 DLC game I’ve ever purchased, if only for the constant stream of free add-ons. Developer Monolith (the F.E.A.R. games) have been very generous in their giving. The game has recieved numerous updates and free additional content ever since it’s Feb. 7th launch date. Presently, game companies usually charge for every bit of downlodable add-on content. In allowing all players to experience most new material for free, Monolith has shown great appreciation to their fans. It’s a nice gesture of their part. GCI may not be the best FPS ever made (it’s a little deriative and still buggy), but it’s a shooter that most can enjoy. So if you’ve ever felt like fighting on the streets of Gotham without the help of Batman or The Joker, than “Gotham City Impostors” is well worth your time. 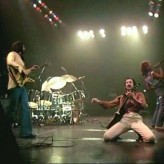