Read of the Week: Until It Hurts to Stop by Jennifer R. Hubbard 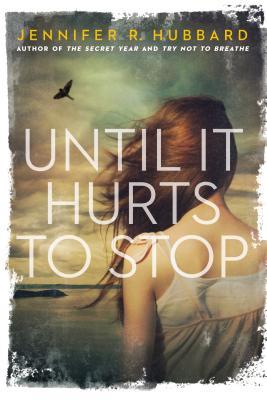 When you can’t trust anyone, how can you ever feel safe?

In seventh grade, Maggie Camden was the class outcast. Every day, the other girls tripped her, pinched her, trapped her in the bathroom, told her she would be better off dead. Four years have passed since then, and Maggie’s tormentors seem to have moved on. The ringleader of them all, Raleigh Barringer, even moved out of town. But Maggie has never stopped watching for attacks, and every laugh still sounds like it’s at her expense. The only time Maggie feels at peace is when she’s hiking up in the mountains with her best friend, Nick. Lately, though, there’s a new sort of tension between the two of them—a tension both dangerous and delicious. But how can Maggie expect anything more out of Nick when all she’s ever been told is that she’s ugly, she’s pathetic, she’s unworthy of love? And how can she ever feel safe, now that Raleigh Barringer is suddenly—terrifyingly—back in town?

There are some books that change you, some books that reach out to you, and some books that define you. All forms have the power to change how, as readers, we think, feel, and believe about life and it’s accompanying journeys. Until It Hurts to Stop is one of those very inspiring books.

Junior high years are often portrayed as the most harrowing and life-threatening years of the world’s existence—aside from high school, of course. What did you think I was thinking? Who can forget the absolute misery that is high school? No one, that’s who. Bullies, droogs(are we still using that word anymore? No? Yeah, I didn’t think so either), the whole gang of Freaks and Geeks. You get the point, they were all there, they all happened, and they all, one way or another, worked toward your ultimate demise.

Until It Hurts chronicles the years after our MC’s junior high fallout, when now in high school, though in no way the top of the tier, manages to stick it out under the radar and keep the life-ruining under control. That is, until her old arch nemesis, Raleigh Barringer comes back to town and throws everything in Maggie’s little world off balance.  It doesn’t help that Maggie’s suddenly interested in her closest guy friend, who may or may not be dating Vanessa, a Raleigh Barringer fan herself.

What really struck me about Until It Hurts was the focus on self worth and doing things for yourself, rather than aiming solely to please others around you in hopes that their happiness will eventually lead to your own. Maggie has never really felt enough for anyone, including her parents, friends, and just about anyone she’s come across, and seeing her tainted thoughts eating away at the beautiful person she had the potential to be, though extremely emotionally, rang true to reality and what much of today’s teenage population faces as a result to harsh standards regarding but not limited to grades, social activities, and appearances pushed on their specific age group. Maggie’s reoccurring self doubt and forced will to move past all the wrong that was done to her only two years before had me crying more times than I’d like to admit to, but was so understandable coming from a seventeen year-old girl who isn’t sure as to where she belongs just yet in society. The emotional fallout’s conveyed by Hubbard are as beautiful as they are startling, and had me rethinking my own experiences as a teenage girl who never felt much like she fit in, herself.

Until It Hurts leaves readers to reflect on their own lives and, even though isn’t the bow-wrapped ending we’d all like, fulfilling and optimistic enough to deem fitting.

I only wish that Maggie’s story had been a bit longer. I was all too reluctant to leave her world so soon.

*Special thanks to Jennifer Hubbard for an advanced copy*