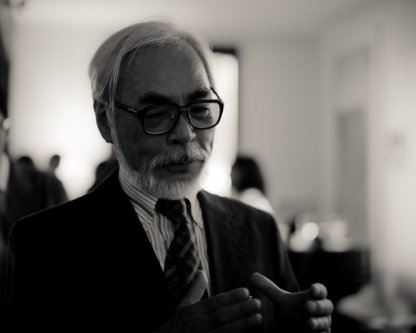 Writers? Animators? Filmmakers? Human beings? It’s hard not to be envious of Hayao Miyazaki’s legacy (and he’s not even close to being dead). Through and through, he is an icon to nearly every facet of creative medium; he writes, directs and draws—quite the package. Whether the Oscar-winning Spirited Away, the nostalgic My Neighbor Totoro or the PG–13 Princess Mononoke, Hayao Miyazaki’s portfolio is extensive, unique, and above all entertaining—entertaining with that philosophical vein running in his craft.To say he has a cult following is an understatement. There are some other ideals and ideas we can draw from Miyazaki and his work.

1: Do not forget where you came from, inspiration lurks there.
In Totoro, nostalgia plays a heavy role in working within the audience. As our world progresses with technology, bits and pieces of society will be lost. Miyazaki records his past for the future. Even though his works contain fantasy spins, it encourages youth to find, like his creatures, the past fantastical too. One’s past can be used for creative fodder, and hopefully, stir others to look into their own culture and history themselves.

2: Have a philosophical reason when you create or do something.
Hayao Miyazaki’s motivation is for children. He said, “I believe that children’s souls are the inheritors of historical memory from previous generations. It’s just that as they grow older and experience the everyday world that memory sinks lower and lower. I feel I need to make a film that reaches down to that level. If I could do that I would die happy.”

When one creates or do something, it is vital to have a reason or motive, this will be a guidepost to when a work is finished whilst being a driving force. A reason is a goal, and without a goal, one may find him or herself ranting rather than creating or doing.

3: Understand “why” you like what you like and how you can make it special.
Whether, Tolkien, Ursula Le Guin, Roald Dahl, Homer, or Moebius, Miyazaki has assimilated his favorite works into his psyché (for example, he would leave fantasy books by his bedside). Rather than regurgitating works over, he would adopt his own work and fuse it together and melt something totally new. By compounding works together, it becomes, like an alloy, something fresh and sharp.  Feel free to internalize work of those you find in high esteem. Question why you like their work, why it works, and how you can get it to work into your work.

4: Look at how other creators’ crafts and make your own version—you might do it better.
In Homer’s “Odyssey,” Nausicaa is a secondary Grecian character. Rather than using a carbon-copy Nausicaa, Hayao molds the character, makes her his own. A character that is more adapted to the times, rounded, full and fitting for his story. As an entertainer, he understands that by running with what works and disposing of what is unnecessary, he can make his work stronger.

Your take on other people’s work will be different than others. (For instance: Faulkner named a ship in his story, Mosquitos, “Nausikaa” while James Joyce’s Ulysses’ Nausicaa is much more sensual.) Take a spin on a work to create something different and fresh befitting for your own time and work.

5: Network.
Often times, you will come across persons who are in awe of your work but have a different style. Hayao Miyazaki networks with random folks, whether Pixar’s John Lasseter or Frenchman Moebius. Mutual respect adds credence to your work and adds a fresh audience. It is mutually beneficial (like a Crocodile and an Egyptian Plover!).

6: Work hard.
Hayao is notorious for his work ethic. He, at one time, mentioned when he works hard he can smell blood inside his nostrils. His hard work is a quality that sets him apart from others.

7: (But!) Love the “quiet” moments.
Take a breather and absorb quiet scenes from nature or your life. There is something to draw from the “be still” moments. Sometimes inspiration can come from the sabbath-like-moments, whether an apple falling on your head or a butterfly that may make you write a poetical song, these moments are vital for sanity and creativity.

8: Announce you are leaving and come back.
Miyazaki said he was leaving the animation industry—several times. This adds a sense of awe to his work. When Ponyo came out, it was rumored his last movie. We all came and sat and watched it. This would help droves of people to go to the theatre for the last-fresh Hayao flick. Though no one should lie about leaving, when you feel like leaving, you best announce it. Whether Philip Roth or Jet Li, it will disappoint your fans, but they will treasure your work even more so (and may encourage you to come back).

Yet, one should not worry about coming back into the business (though you can apologize Prodigal son style!). They will welcome you with open arms! This will add natural excitement to your work. Plus, it is a natural attention grabber. They may call you back into action like Rambo, and this is flattering to your skills.

9: Feel free to disagree.
Hayao is at times, seemingly—in the lightest sense of Bob Dylan styled definition—iconoclastic. He disagrees with nuclear power, America’s wars, iPads and some of the Disney-esque views on storytelling.  He is willing to go against the era, times and pop culture —a key to be unique. By ebbing away from the flow of pop culture, he creates his own niche.

10: Love what you do.
A common phrase tossed around here and there is, “He who hath not love is a clanging cymbal.” If you love what you do, it will show. Hayao Miyazaki’s loves can be seen, and we love him for that.