All That Matters Is What You Do: Heroism in Angel 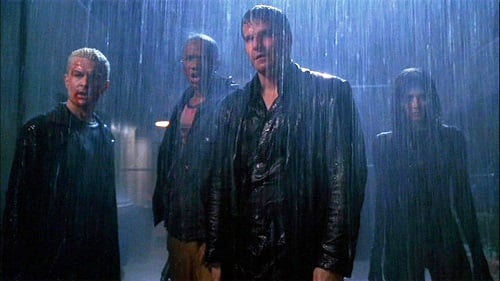 There’s a moment in the pilot episode of Angel during which Angel is chasing down a bad guy in a parking garage and has to get to his car. The shot is set up like any call to action hero shot—the bad guy is getting away, and our hero sprints to his own car, leaping into the front seat and reaching for the keys… only to find out he’s in the wrong car. This moment perfectly encapsulates everything Angel will ultimately accomplish throughout its five season run—moments of heroism followed by small or big mistakes that may or may not have serious consequences, while also poking fun at the genre itself.

Angel was created by Joss Whedon and David Greenwalt, running from 1999–2004. It was the spin-off show of Buffy the Vampire Slayer which followed the continuing plights of Angel, the 250-year-old vampire with a soul. Despite the connection between the two shows, however, Buffy is the more popular of the two, and is often remembered for its leading female protagonist (played by Sarah Michelle Gellar) who fought the forces of evil that were more often than not accurate metaphors for growing up. Throughout Buffy‘s seven season run, Buffy and company save the world a time or ten, true, but it’s the heroism in Angel that I think captures a more relatable and universal desire to do good.

To understand the heroism of Angel is to first understand Angel. We first meet Angel on Buffy as a vampire who was cursed with a soul by gypsies, so that he could suffer for the pain and turmoil he once caused as the evil vampire named Angelus. Angel’s soul is what puts him on the path towards redemption, a path that begins in Buffy. It’s explored in much more detail in Angel, not just through Angel’s journey, but through secondary characters as well. The show begins rather simply—Angel, Cordelia and a demon named Doyle open up Angel Investigations, a private detective agency that handles supernatural cases. Their slogan: “We Help The Helpless!” The idea is to help the little people, even if they do sometimes charge them for their services.

But where the show really hits its stride in storytelling and theme is season two. At the end of season one, Angel and Cordelia, now accompanied by another Buffy alum Wesley Wyndam-Pryce, discover the Shanshu prophecy. A prophecy that states, should the vampire with a soul save enough lives and defeat enough demon armies, he will be rewarded with his humanity. It’s a concept that consumes Angel during season two, and sends him down a dark, righteous path in an effort to reach his goal faster. During this time, Angel fires all of his friends and goes down this path alone.

Angel’s downward spiral culminates in episode 16, “Epiphany.” After essentially being told that Hell already exists on Earth by Holland Manners, Angel has an epiphany. He explains this epiphany to Kate, who he had just saved from suicide.

Angel: Well, I guess I kinda worked it out. If there’s no great glorious end to all this, if nothing we do matters, then all that matters is what we do. ‘Cause that’s all there is. What we do. Now. Today. I fought for so long, for redemption, for a reward, and finally just to beat the other guy, but I never got it.

Kate: And now you do?

Angel: Not all of it. All I want to do is help. I want to help because I don’t think people should suffer as they do. Because, if there’s no bigger meaning, then the smallest act of kindness is the greatest thing in the world.

This sentiment is the driving force of Angel, a sentiment that feels pretty universal to me. Something that can be applied to everyday life. And it’s perfectly modeled in a vampire detective show. The show is riddled with examples of characters making decisions that tie into Angel’s epiphany, even if they aren’t consciously aware of it. From Faith’s decision to turn herself into the police in season one, and then making the decision to break out of prison three years later in order to save Angel, to Wesley’s kidnapping of Connor, Angel taking over Wolfram & Hart to save his son, and Gunn allowing Wolfram & Hart to fill his head with lawyer knowledge. Decisions made by characters with the best of intentions, and then those characters facing the consequences of their actions. These characters make mistakes, but they learn from it and they move on.

What is most impressive about Angel is how it holds onto its inherent DNA and threads it throughout its entire run. Yes, even in the muddled slog that is season four, there are great moments. Remember this little gem that Angel tells his son in the season four premiere, after Angel is rescued from the bottom of the ocean:

Angel: Nothing in the world is the way it ought to be. It’s harsh, and cruel. But that’s why there’s us—champions. Doesn’t matter where we come from, what we’ve done or suffered, or even if we make a difference. We live as though the world is as it should be, to show it what it can be.

And then comes season five of Angel. A great and glorious chapter for the Angel Investigations team. It’s tragic, hilarious (puppet Angel will never not be funny), emotional, sentimental and a thrill of a ride. And it’s in Angel‘s final hour that it completely takes its idea of heroism and holds onto it until the screen cuts to black. Season five puts the team in charge of Wolfram & Hart, the evil law firm that had been the bane of their existence for awhile. This season has an “in the belly of the beast” mentality to it, as the team makes calculated moves to eventually turn on their employers—the off-screen Senior Partners, who exist in another dimension. Part of this decision includes Angel signing over his rights to the Shanshu prophecy, which had so consumed him three years prior and now is officially off the table. In the last seconds of the series finale “Not Fade Away,” Angel, Spike, Gunn and Illyria stand in an alleyway facing down the wrath of the Senior Partners’ demon army. Spike asks what the plan is, and as the demon army descends, Angel replies, “Well, personally, I kind of want to slay the dragon. Let’s go to work.” The episode, as well as the series, ends with Angel bringing down his broadsword. But the important aspect of this is where the finale ends. We don’t even see the battle, and barely even the beginning. That mid-sword swinging finish is the point of Angel’s epiphany back in season two. It doesn’t matter if Angel Investigations wins this fight—in fact, it’s highly unlikely they won’t. All that matters is that they fought.

In real life, we probably aren’t battling literal demon armies with a broadsword and a couple of soulful vampires at our side. But Angel‘s ideals of heroism and the everyday plight to simply help others makes the show still relevant today.