Book Review: The Sidekicks by Will Kostakis 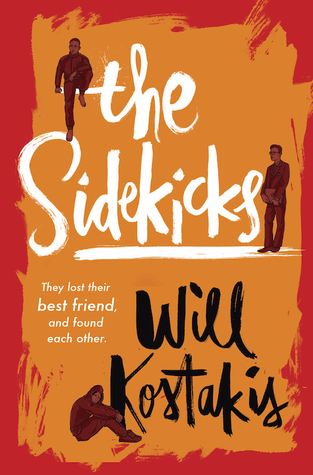 I’m still deciding on whether or not I can add this novel to my “Favourite Books” pile on my bedhead shelf or if it should just remain in the “Meh” book pile. There are many aspects of it that held my interest like a gum on the backside of a school desk but there were also dull moments that led me to pick up other books.

The Sidekicks by Will Kostakis is a coming-of-age novel that follows the lives of Harley, Miles and Ryan and how they come to terms with the death of Isaac, their shared bestie. The book delves into the different stages of grief and is written from the point of view of all three boys, giving readers the opportunity to view each boy’s relationship with Isaac and witness how deeply integrated Isaac’s presence was in their lives. As each of the characters attempt to come to terms with the loss of someone as vibrant as Isaac, both readers and the protagonists learn more about the secret lives and activities that each boy had with Isaac which caused their bond to him to be so strong.

I couldn’t overlook the blatant stereotypical traits of each boy; the bad boy, the brain and the athlete. Miles, a.k.a. the brain, speaks and behaves like a robot which makes it seem like people who have an above average intelligence aren’t capable of having normal conversations and that the only word not in their vocabulary is “fun”. His only redeeming quality that breaks the stereotype is that he is a criminal mastermind. Harley, a.k.a. the bad boy, is the bad boy template that many YA novels copy and paste into their stories. He’s misunderstood and hangs around questionable characters. To further emphasize his “badassness”, he’s obviously named after one of the most notorious bikes, the Harley-Davidson. Then there’s Ryan, the star athlete of their school. Similar to any other YA book with a popular character, Ryan is widely admired by his schoolmates and has a bright future. He was probably the least interesting character to read about. If it wasn’t for his well-hidden secret, I would have skipped his part of the story altogether.

Even though the characters felt unrealistic, the plot kept me mildly engaged. I was curious about what other dark secrets Isaac held to himself when he was alive and how these secrets were able to bring the boys together. I loved reading about the way in which Ryan’s biggest secret was exposed to the entire school population, including his mother. I more than enjoyed the constant banter between Harley and Miles and how one amateur film helps them to find common ground. I wanted to know how the author would tie up the loose ends even though the ending was highly predictable. Regardless, The Sidekicks is a novel with few elements that set it apart from your average YA book.

Still, I would recommend that anyone looking for a quick read that focuses on overcoming tragedy and unlikely friendships go pick up a copy of this novel.

The Sidekicks by Will Kostakis

0 0 0 0
Previous ArticleBecky Albertalli on Love, Simon and writing for the LGBTQ community
Next ArticleBook Review: THE CRUEL PRINCE by Holly Black