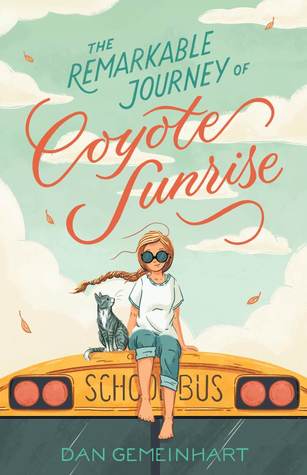 There’s something about road trips that change people. It might be the places that you see along the way that leave you in awe or the curious people that you come across. Despite the specifics, anyone who decides to leave their comfort zone and venture on a new path does not come back the same.

The Remarkable Journey of Coyote Sunrise by Dan Gemeinhart is a book that explores the story of a twelve-year-old nicknamed “Coyote” and who, after losing her mother and sisters five years ago in a car accident, has been on a never-ending journey with her father in a revamped yellow school bus. Along the way, she and her dad come across a peculiar group of people who add a certain splash of adventure to their lives.

Before reading this novel, I reminded myself that I would be reading a middle-grade book and that I couldn’t harshly judge the writing style because it was meant for a much younger audience. However, after cringing at some chapters in the beginning, I started to get sucked into the story and completely disregarded the fact that I was reading a children’s novel. The storyline progressed quickly and, while it was easy to predict the end of the book, I enjoyed meeting the diverse and lovable charaters that Gemeinhart conjured up.

Coyote’s character was hard for me to like in the beginning because it felt as if the author was stressing too much on a southern accent and it annoyed me more than it should. Thankfully, she had redeeming qualities that made up for the way she spoke. While her father was comfortable with pretending as if the events of the past didn’t matter, she bravely faces the truth head on. It was easy to get caught up in her free spirit attitude and I adored the moments in the book where she encouraged the other characters to face their issues, especially her newly-found friend, Salvador.

I think the author did a great job of writing Salvador’s character. He’s introduced into the story when Coyote’s dad accidentally leaves her behind at a gas station. Coyote’s aware of the many ways in which her father mistakenly leaving her could impact their lives (police interference being the worst case scenario) and tries to keep a low profile until he returns but fails to do so. In comes Salvador and his mum who offer her sanctuary. When her father returns, Salvador and his mum joins the crew on their crazy adventure. Even though Salvador is portrayed as this strong-minded pre-teen, he has a dismal backstory that makes his character even more endearing. He’s the kind of friend you want around; the type that has your back despite the situation.

The other characters were also entertaining to read about but Gladys, by far, takes the cake as the weirdest character that the group comes across.

All in all, The Remarkable Journey of Coyote Sunrise is a book that grabs your attention and holds it until the very end. I suggest taking this little treasure with you if you’re going on your own adventure and in need of a great traveling companion.