Read of the Week: Desert Tales by Melissa Marr 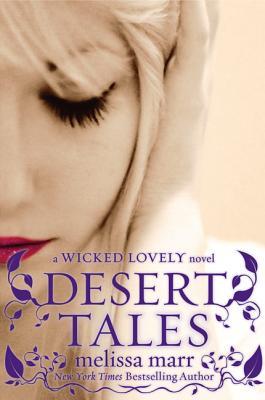 Return to the world of Melissa Marr’s bestselling series and discover how the events of Wicked Lovely set a different faery tale in motion. . . . Originally presented as a manga series and now available for the first time as a stand-alone novel, Desert Tales combines tentative romance, outward strength, and inner resolve in a faery story of desert and destiny.

The Mojave Desert was a million miles away from the plots and schemes of the Faerie Courts—and that’s exactly why Rika chose it as her home. The once-mortal faery retreated to the desert’s isolation after decades of carrying winter’s curse inside her body. But her seclusion—and the freedom of the desert fey—is threatened by the Summer King’s newfound strength. And when the manipulations of her trickster friend, Sionnach, thrust Rika into a new romance, she finds new power within herself—and a new desire to help Sionnach protect the desert fey and mortals alike. The time for hiding is over.

It’s been a while since I’ve looked at a book and felt happy thoughts, but Desert Tales has finally gotten me to the happy-dippy book place that I want to be. I read the first Wicked Lovely book over summer break about four years ago(I think) and absolutely adored it. Unfortunately, I never got around to reading the other few in the series. Always a busy body with something to do, I am. There’s so much about Desert Tales that I loved and it’s hard to point out one thing when I was content with the majority of it.

Something that keeps nagging me, though, is the way Melissa handled this side story, if we can call it that. While, yes, it is a side story, I felt like not much was happening for the story line and that it was more of a novella than an actual novel. Desert Tales was actually originally a three part manga series, so I’ve read, and that makes the length and depth of the book version understandable.
Something else that bugged me: Jayce, Rika’s human love interest. Something felt off about him throughout the entire course of the novel and maybe it had to do with Rika’s not being a human and his, you know, actually being one but it was just always there. Every time he happened to pop on up I found myself both disgusted and angry with Rika’s decision in romantic tastes. Which brings me to Shy, the not-so-lovable, but also very lovable, sneaky fox fairie. I loved this guy with all my heart and was rooting for him the whole way through, as wrong as it may have been.
Melissa Marr’s writing style was, as always, delicate and languid in every way possible. Lately I’ve been having issues with rusty writers and their way of going about things but in this department, from the few works of Marr’s that I’ve read, she never seems to let fans down.
Desert Tales was extremely realistic, and without spoiling the end I can say I was happy with the outcome and hope with all my heart that Melissa chooses to dwell on Rika’s story after the end of Desert Tales.
After finishing DT I hope it’s only a matter of time before I get to continue with the Wicked Lovely series, as this is definitely the push I needed to get there.
Fans of the books as well as anyone who has yet to expose themselves to Melissa Marr’s world of magic and chaos will love all that Desert Tales has to offer.
In the eyes of an almost-fan, it didn’t disappoint.

*Thanks to HarperCollins for the ARC*