Read of the Week: Another Little Piece of My Heart by Tracey Martin 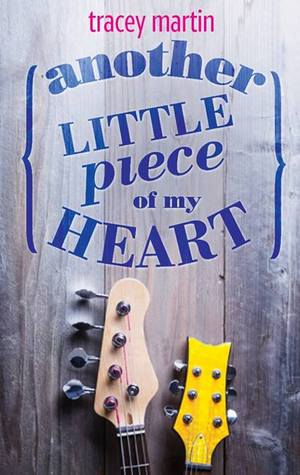 What if your devastating break-up became this summer’s hit single? In this rock-and-roll retelling of Jane Austen’s Persuasion, music can either bring you together or tear you apart.

At her dying mother’s request, Claire dumps Jared, the only boy she’s ever loved. Left with a broken family and a broken heart, Claire is furious when she discovers that her biggest regret became Jared’s big break. While Jared is catapulted into rock-star status, another piece of Claire’s heart crumbles every time his song plays on the radio.

The summer after her senior year, it’s been months since the big break-up, and Claire is just trying to keep her head down and make it through a tense trip to the beach with her family. But when Jared shows up, and old feelings reignite, can Claire and Jared let go of the past? Or will they be stuck singing the same old refrain?

It’s always hard reading a book when you find yourself growing emotionally attached. Why? Because characters bring pain. They bring understanding. They bring remembrance. Another Little Piece of My Heart, personally, chronicles what it would be like for all of us to bump into that first love again. Or, no, hold that thought, better yet, it chronicles what would happen if any of us were to ever come across that one love who you’ve never really stopped loving. And then from there, what would happen to every single one of us, ensues.

Phase one: Denial; unreasonable, or, eh, reasonable, swearing of apparent hatred directed at said ex-lover. Also known as trying to keep far, far away, etc.
Phase two: Toleration; dealing with minimal association as long as it doesn’t interfere with your obvious plans of making them jealous(duh).
Phase three: Ultimate Demise; AKA no further emphasis needed. All you need to know is you failed, which may be a good or bad thing depending on your forever-and-never significant other.
Can we really even blame ourselves? I’m not even entirely sure.

Except, you know, what would you do if this guy also happened to get ultra famous after writing a whole album just about trashing you? Yeah, we’d be mentally dysfunctional, just the same.

Another Little Piece of My Heart takes you back to that deep dark place and asks you one and only one question:

If you had a second chance, would you take it?

I’m not going to further disclose any of the memories it brought back to me, or how I feel about that one question, but I will say that it struck a chord, and the more and more I read into the book, the deeper it dragged you into that world and the harder it pressed that question on you.

Character development was fluid though I wish Martin would have included more flashbacks to the time Jared and Claire were together. Some more insight into their relationship would have made it easier to understand the place both of them were coming from.

While the final scene was conclusive enough, I felt though I was left with too many questions to feel safe with where the relationship stood.

While I did feel that the novel had it’s unrealistic points and debatable conclusion, it all and all gave me the hopeful sense I think all readers do need time and time again. Being courageous isn’t easy, and sometimes all it ever really takes is a good book to give you that little spark of nerve that you need.

Anyone looking for a fun read about second chances with who might have been your first love and fans of Where She Went will love Another Little Piece of My Heart just as much as I did.