Read of the Week: The Sound of Letting Go by Stasia Ward Kehoe 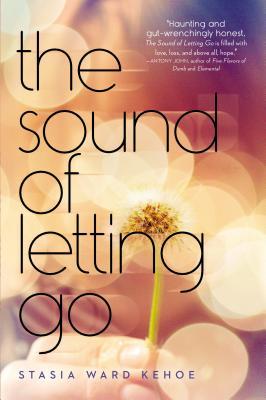 For sixteen years, Daisy has been good. A good daughter, helping out with her autistic younger brother uncomplainingly. A good friend, even when her best friend makes her feel like a third wheel. When her parents announce they’re sending her brother to an institution—without consulting her—Daisy’s furious, and decides the best way to be a good sister is to start being bad. She quits jazz band and orchestra, slacks in school, and falls for bad-boy Dave.

But one person won’t let Daisy forget who she used to be: Irish exchange student and brilliant musician Cal. Does she want the bad boy or the prodigy? Should she side with her parents or protect her brother? How can she know when to hold on and when—and how—to let go?

The Sound of Letting Go is a beautiful example of wondrous poetic literary devices in our modern-day world. It’s written style so simple, yet so empowering.

The characters we’re exposed to are beautifully individual and achingly true to our real life selves. Seeing all the struggles Daisy has to overcome, including her autistic brother, parents failing marriage, and the uncertainty that is bad boy Dave, made me feel so hard for her. And just so, at the same time, I felt myself relating to her on levels I hadn’t even thought would be possible considering the situation she herself was in. Her passion for music and inability to know what to feel what with her world crashing around her was all too real, and seeing her dedication to her brother among other things was heartbreaking. Despite her odd life, Daisy is just like any other teenage girl you’d come across in high school, and is so honest that you can’t help but love and be her all at the same time.

With that being said, I’ll leave you with one of my favorite quotes from The Sound of Letting Go made by Daisy-brains herself.

Everything I know about sex

Anyone who’s watched any HBO sitcom before the age of fourteen probably considers this inexplicably true.

My only issue with our characters was that Dave just happened to jump on the bandwagon and his and Daisy’s relationship felt too quick and almost always too strained. There was a lot about Dave that just felt wasn’t being said, and I’ve got a long list of ideas telling me just who, what and why. As much as I did like his character and didn’t think he was always a bad influence, something about him was way off and I’m still sure it’s more than just what Daisy knew from his past. We also never got much of too cute and modestly modest Irish exchange student Cal, who might have made a more interesting love interest? I’m not sure.

While writing was able to flow smoothly and get it’s point across, I did feel that at times the poetic style was too simple for the story at hand. There were some things I would have preferred Kehoe dwell on further than provided and certain bits and pieces I felt needed to be said/done wholly. In all honesty, though, the story might not have been able to make such an impact had it been written any other way, so I’ll trust that Stasia knew what would work and had that all in mind.

While The Sound of Letting Go technically closes the curtain at the end of the show, I wish there was more to the story to be said. So much of Daisy’s life is changing at the end of the novel, but something tells me Stasia planned it that way. I’d like to think Daisy’ll be just fine.