Read of the Week: Let’s Get Lost by Adi Alsaid 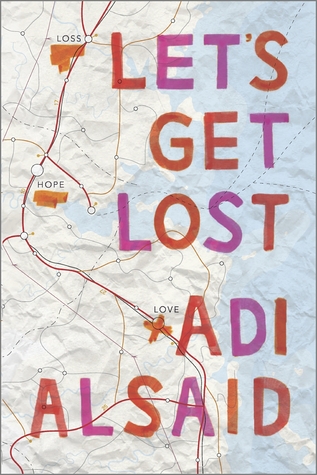 Four teens across the country have only one thing in common: a girl named LEILA. She crashes into their lives in her absurdly red car at the moment they need someone the most.

There’s HUDSON, a small-town mechanic who is willing to throw away his dreams for true love. And BREE, a runaway who seizes every Tuesday—and a few stolen goods along the way. ELLIOT believes in happy endings…until his own life goes off-script. And SONIA worries that when she lost her boyfriend, she also lost the ability to love.

Hudson, Bree, Elliot and Sonia find a friend in Leila. And when Leila leaves them, their lives are forever changed. But it is during Leila’s own 4,268-mile journey that she discovers the most important truth— sometimes, what you need most is right where you started. And maybe the only way to find what you’re looking for is to get lost along the way.

We’re all lost at one point or another. As teens, as pre-teens, adults, elders. It always happens, never fails. One day we’re all going to take a step back and look at our lives and wonder if they’re headed in the right direction.

I can honestly say that this is me right now. As an English major, as a book reviewer, as a young adult who wants to write until the day she dies and do nothing else between then and now, this is me, and I know this is going to be me, for now, forever. But sometimes I have to sit back and ask myself if this might be the right path for me. It’s not an easy life, but writing makes me happy, and every day I have this little battle with myself, the writing almost always wins. I fear the day it doesn’t.

Alsaid really does chronicle the emotions flooding through the cursed youth as they venture through the great unknown looking for the right answer, the right way. Let’s Get Lost is the kind of book every single person needs to read once in their life to understand that there are obstacles and uncertainties and that’s alright. I feel like this book really did serve as an assurance for me, and it’s great for all audiences; there’s bundles of romance, heartbreak, loss, hope, redemption, and much, much more.

I loved the way Adi organized the writing and included postcards in the story – it was all very neat and wittily interconnected. Every small story was somewhat relatable and easy to understand from different points of view.

Leila, I think, has the capability of speaking out to so many young adults, or lost people, out in the world. She was by far my favorite character all throughout Let’s Get Lost, followed by grieving Sonia, and more than once I found myself in her shoes, understanding her need to add to the greater good and do something that can benefit more than just herself. Hudson was also equally enlightening, because needless to say, we’ve all been the one kid who thinks they’ve wanted to be a doctor since they were a kid before realizing that needles and stethoscopes aren’t as fun as they sound.

Let’s Get Lost has honestly affected me more than any other John Green novel I’ve read, and in the long run, I think above all else, it’s helped me understand myself more than any other book has, too. And, sure, I get that it’s fiction and while it’s the point, it’s also not the point, and even though I got into the self-discovery thing, it’s also just a great read to take on a vacation, or read during a particularly slow school semester, and that’s just what makes it great: it works, no matter what the circumstances are.

I think Let’s Get Lost has the potential to be one of those eye-opening novels we’ll still be talking about when we’re old and gray, and I certainly hope it gets there.