Read of the Week: Summer on the Short Bus by Bethany Crandell 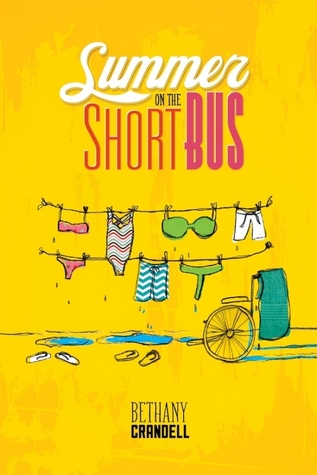 Cricket Montgomery has been thrown under the short bus. Shipped off to a summer camp by her father, Cricket is forced to play babysitter to a bunch of whiny kids—or so she thinks. When she realizes this camp is actually for teens with special needs, Cricket doubts she has what it takes to endure twenty-four hours, let alone two weeks.

Thanks to her dangerously cute co-counselor, Quinn, there may be a slim chance for survival. However, between the campers’ unpredictability and disregard for personal space, Cricket’s limits get pushed. She will have to decide if suffering through her own handicapped hell is worth a summer romance—and losing her sanity.

Realism. Do we ever really have that in the young adult genre? It’s something not often considered, though it should be.

Sure, we have contemporary fiction, romantic fiction, realistic fiction. They all go hand in hand, for the most part, but do all of these books filed under these specific categories ever really live up to the name?

Most times, to be completely honest, they do not.

Is it possible for the events to happen in real life? For the most part…yes.

Now, is it probable that the events will happen in real life? This, I think, most of us can agree that the answer is not the yes we’d like it to be.

Are we always the girl who gets the guy at the end of her modern-day fairytale? Rarely, sometimes, maybe; never just yes.

Does the badboy ever go good for the right girl? Maybe for some other teens.

Does the mean girl always end up friendless or a changed woman by the end of high school? I laugh at this question.

Books, though, filed under realistic or not, are meant to take us out of the current dimension we’re placed in and bring us up to another level that evokes dreams and fantasies. It’s only natural that at the end of the story everything is wrapped up nice and tightly, left at odd ends and on an optimistic note. Isn’t that what we all want? Someone to show us that, sure, it’ll never happen to us in real life, but it happened to a character in a pretty damn good book and that’s got to be enough? I think I speak for everyone when I say we want books to show us that there are possibilities, the only thing being, of course, is that if anything at all, we want to see them happening in a more openly realistic way that tells us real life isn’t as great as all those books you’ve been reading lately but it can be good, it can be natural.

In Bethany Crandell’s debut, she accomplishes just that.

There’s no skittering around the tough stuff, and as sad as it is to admit, we live in a world where very few are understanding of those less-than capable and she reflects that in her writing, shedding to light that, again, no, our world isn’t perfect, but there are people that try on a day-to-day basis to make things better, not for themselves, but others, more importantly.

This book is so important in the sense that it really does mirror modern-day society and the problems many people face and willingness of others to either shun it or work to better things.

The plot was so fresh and original and I loved diving into this world that wasn’t entirely too different from ours today. Cricket’s attitude at the beginning of the novel was saddening but also painstakingly understandable considering the environment she came from is one most of us are familiar with. I loved how Quinn and the whole gang helped to better inform her and eventually enlighten her experience.

Also, did I mention that aside all things, we have a Zac Efron look-a-like? Because who can pass up that kind of thing? Don’t we all want a nice Zac-looking boy in our lives? I know I sure as hell do.

Anyone looking for real realistic young adult fiction in a world where not everything is grand, Summer on the Short Bus is just what you need in your life.

0 0 0 0
Previous ArticleBook Review: 'The Conspiracy of Us' by Maggie Hall
Next ArticleThe Young Folks vs. The Top 40: Week of March 5, 2015
Latest Posts
Top Reviews
Follow Us
Watch live video from GamingFrogTV on www.twitch.tv
Most ViewedWEEKMONTHALL