Read of the Week: Boys Like You by Juliana Stone 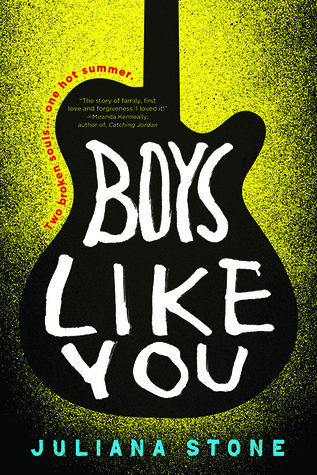 One mistake.And everything changes.For Monroe Blackwell, one small mistake has torn her family apart –leaving her empty and broken. There’s a hole in her heart that nothing can fill. That no one can fill. And a summer in Louisiana with her Grandma isn’t going to change that…Nathan Everets knows heartache first-hand when a car accident leaves his best friend in a coma. And it’s his fault. He should be the one lying in the hospital. The one who will never play guitar again. He doesn’t deserve forgiveness, and a court-appointed job at the Blackwell B&B isn’t going to change that…Captivating and hopeful, this achingly poignant novel brings together two lost souls struggling with grief and guilt – looking for acceptance, so they can find forgiveness.

I’m not going to quote things, because, well, with ARC’s that’s a no-no, but Monroe and Nathan’s meeting is rather uncomfortable, and, at best, a bit too awkward for my taste. It’s only one-sided, though. Why? Because Nathan takes one look at Monroe, addresses the fact that he has no idea if shes hot or not, mentally, of course, and decides that she’s going through something just as tough as he is. One look. One second. One glance. He knows. It’s also written rather prematurely, which makes things even more unsettling. I don’t know. Guys are usually sort of vapid so I’m having a hard time thinking this boy had any idea what he was working with. Either way, the first encounter sort of set the relationship up for me so from then on out I had trouble getting the swing of the pair. Going forward, they get cozy way too fast, not to mention tell each other their entire back stories on the second day of knowing each other. On the third day, Nathan could feel Monroe when she was nearby.

It only escalates, I promise.

Which also brings me to Stone’s writing style. One word. No. I understand that most YA writers have had quite a bit of time to forget what it’s like to just be a teen, but as an author it’s also their job to get inside the characters head and know things, and Monroe’s dialogue was worse than Regina George’s and Nathan’s something incomparable but altogether bad.

I feel the need to mention that I’m listening to One Direction as we speak and it’s making me happy so I want to write nice things about this book even though I’m not exactly sure I dug it. There is mention of The Cramps though so that’s pretty damn cool. But Nathan mentions that he likes them because the guitarist is old school and, I mean, why wouldn’t he be? They formed in 1976. What was he expecting? What was anyone expecting?