Read of the Week: Grace and the Guiltless by Erin Johnson 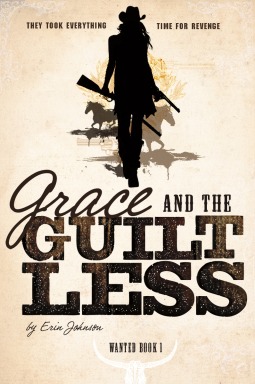 Grace Milton’s peaceful life with her family on a horse ranch outside Tombstone, Arizona is shattered in one devastating night. Her family is brutally murdered by the notorious Guiltless Gang, leaving Grace the only survivor. Trekking into the wilderness on her stallion, Grace falls ill from the elements. A young man name Joe saves her life by taking her to an Apache camp where she learns about their way of life and begins to fall for Joe. When Grace encounters one of the Guiltless Gang, her strength will be tested. Can she survive as a bounty hunter, or will she fall into darkness again? This Western revenge epic will captivate teen readers with its ruthless spirit of suspense and adventure and a powerful central romance.

When was the last time I read a Western? What even counts as a Western, at this point? All I know is that Blood Red Road is one of my favorite series and Saba talks really damn interestingly and if that isn’t one twisted Western I don’t want to know what is. Have you read that series, ? It’s so amazing. Really. Please go read it if you hadn’t. What are you doing reading a YA Western book review when you haven’t read Blood Red Road? Some things aren’t right, people. Did you know Dimitri from Vampire Academy loves Westerns? You didn’t? Well, now you do, and you don’t have any reason to not read a good Western, because we all need a good Western now and then.

Grace and the Guiltless is exactly that. The best thing about these novels is that they’re such a rarity, an oddity, really, that when they do come around, the hype is so stressed and the pressure put on these books is outstanding. Grace doesn’t disappoint, at all, though. Readers are given everything they’d expect from any other Western set and more, even. Except for a lot of slang, because there isn’t that. No. There are fun tribes, though. Yes. Double yes.

Grace is a lovely character, and while she was sometimes too childish and too vengeful for my tastes, I loved seeing just how determined she was and knowing that everything she did wasn’t purely out of hatred. Joe was so much more peaceful and I liked the balance between the two characters. Their friendship was admirable and the romantic tension that was stretched between them the majority of the time is mostly what kept me reading.  I wished the ending would have been a bit more conclusive, and I really hope that Erin Johnson goes on to pursue a series for Grace, because she really does deserve it, and also because I would really like one.