Read of the Week: Disneylanders by Kate Abbott 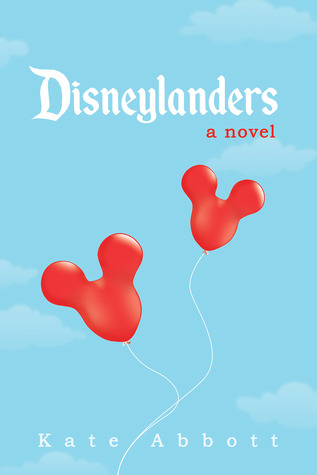 In DISNEYLANDERS, 14-year-old Casey Allison, on the brink of starting high school, struggles to find a new identity on her family’s annual summer vacation, but with the help of an outgoing boy she meets while waiting in line, she discovers that Disneyland is the one place where her overprotective parents let her have the freedom to grow up.

If you know me, it is way evident that I am a Disney enthusiast. If you don’t know me and read my reviews, then it is still pretty noticeable, so you can imagine just how eager I was when I found out that there was this book called Disneylanders and it’s about California, kissing and the icky bits of being a teen. We can all thank my Disney pen pal for this. Hi, Camille! She was the one who brought this book to my attention so many hugs going her way.

It’s been so long since I read a book with a lead under the age of sixteen, and I can honestly say that being put in the mind of a fourteen year-old and reliving probably one of the most awkward stages for anyone was both parts enlightening and slightly disarming. Thinking back, though, that small gap between middle and high school is a beautiful little time and one I wish I would have appreciated; not a girl, not yet a woman. Casey’s accounts during this time were memorable and refreshing, and I many times found myself relating to her logic while also recognizing that there was a lack of wisdom there. All in all, a very bittersweet journey, I would say.

Bert and Casey’s whirlwind romance had my heart all over the place. On every page their adorably raw puppy love shone so brightly and it was wonderful and nostalgic in so many ways. It came across the story in such a true way that had me rooting for them, even though I wasn’t all too sure what the outcome would be. Bert and Casey’s young love was the best one of all: true and emotionally encompassing. This is the kind of romance we all hopes for at fourteen, ladies. That’s right, those days we spent dreaming on sandy vacation shores, Bert was the boy we were looking for and almost never actually found.

Disneyland. Who wouldn’t like a novel set in the place of wonder and mayhem itself? The only thing better than that is a book set in California and Orlando. But that’s impossible…or is it? Point being, Disney is great and why not set your book there?

Kate Abbott’s debut novel is a sweet read about a girl trying to find the in-between when a mysterious boy comes along and changes everything. Anyone who’s a fan of the Mouse and is looking for a getaway from reality while stuck in the real world will love this read.