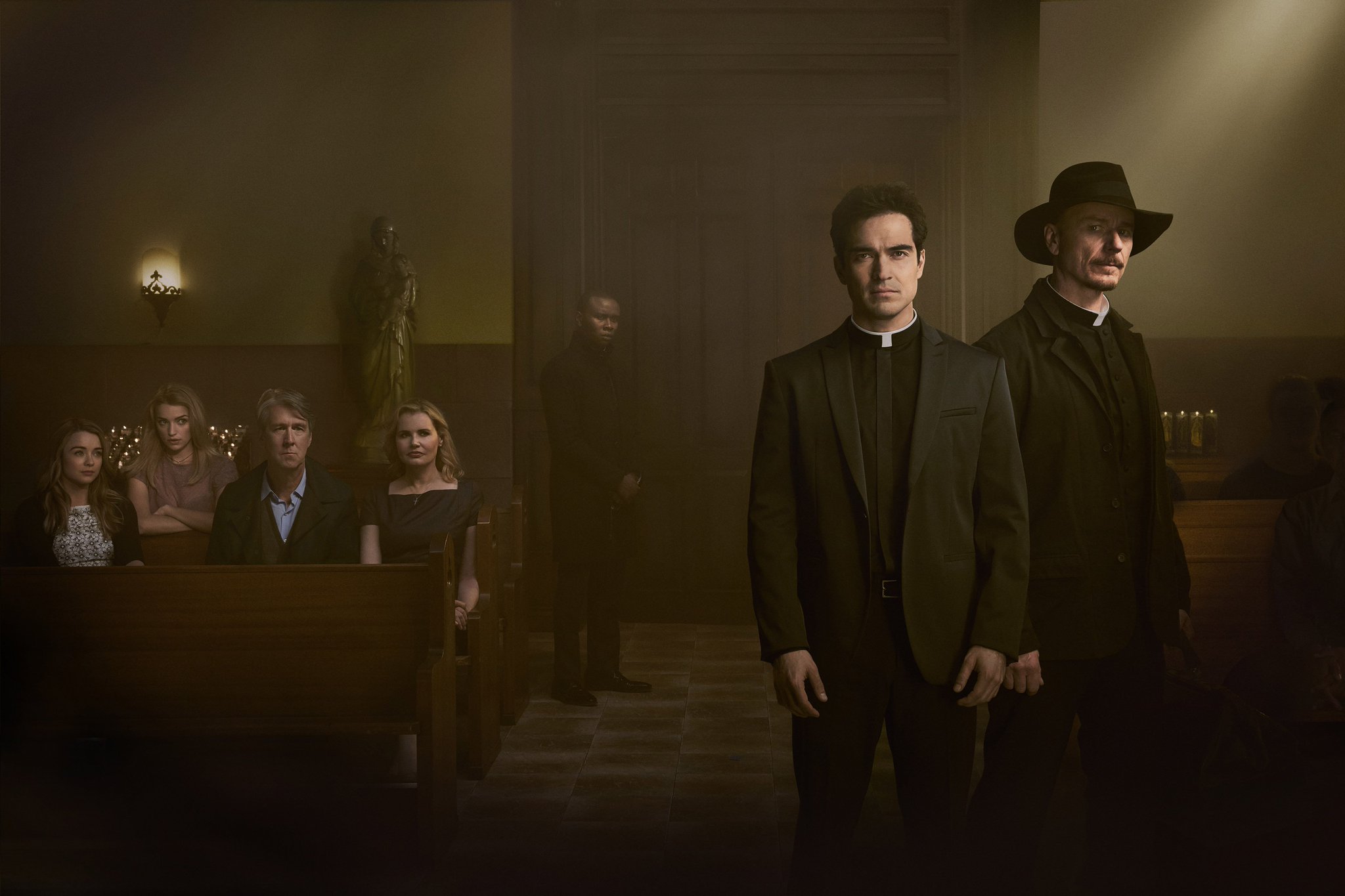 Do you really mess with an iconic horror franchise that’s been around since the 70’s and now bring it to television? The answer looks to be YES. That is if you have Fox behind it, which is the case. The Exorcist television series is no joke, it’s spooky good. If you are a fan of The Exorcist movies, the opening scene of the show provides a strong indication of honoring the film.

The tone and look of it is spot on. In the first scene, a man in a hat (who we soon discover is a priest) is walking through a dark and gleamy alley. He stops to wash his face, rebid dogs are barking, screams and cries are emanating from a distance. He starts walking up a stairwell, stops and looks up at a house in the far distance above. The huge sooty looking house has one window lit up where the cries and screams seem to be coming from, as the camera pan stops and focuses on the house an immediate fade to black with a red lettered “THE EXORCIST” title card coming across the screen with an eerie background music. Now that’s a way to start out a show. Very well executed. Not only does it establish the mood of the show, but it also stays on par with what the film version had already established.

The rest of the episode plot focuses on a young priest, Father Tomas Ortega (Alfonso Herrera) who is being drawn in by outside forces to investigate a potential demonic possession of a member of his parish. Angela Rance’s (Geena Davis) family is in turmoil and seeking Father Tomas’ assistance in helping out her daughter, who is believed to be possessed. There are a few other side stories, one in which the pasts of Father Tomas  and Father Marcus Keane (Ben Daniels) are explored.

I did find the show to be sort of vague in terms of what story plots it was trying to establish. It goes back and forth between multiple locations and characters, dabbing in different storylines that left me somewhat confused. The flashbacks weren’t concisely elaborated on either. A little less plot ambiguity and more direction would have been helpful. The show is set in Chicago (as a local Chicagoan, I’m thrilled by that) and from the initial indication in the pilot, the show will be heavily Chicago-centric.

The casting for the show is solid. Herrera is very believable and is a natural as Father Tomas. I liked Ben Daniels’ performance as the edgier and conflicted character of Father Keane. The distinct contrast of personalities between the priests balances out the characters. Davis adds some name power, and her portrayal of the unassuming Angela Rance adds another perspective of an outsider that’s not immersed in the ways of the church. Question is, will these characters be regulars? Will they be switching storylines midway through the season? The pilot didn’t give much indication of a long-term direction of the show.

My biggest concern was how far would the show push the envelope. It has a lot going against it. It’s a network television show that’s attempting to capitalize on the name and mimic one of the greatest horror films ever. That’s a lot to measure up to. Can horror be done successfully on network television? While the first half of the show was slow paced, the second half certainly picks up on some of the scares. In one scene, a priest is conducting an exorcism on a young kid who is spewing out dialogue in a variety of creepy voices. It is chilling to watch. My question of the show being capable of bringing about genuine scares was answered with a “yes”.

Ultimately, what we learned from the pilot of The Exorcist is that it tries to incorporate and stay faithful to the tone of the original film. It’s creepy enough to give you some chills. Father Tomas is the character that the show will be centered around and whose backstory will be developed as the season moves along.The Friday night slot will be a good move for Fox. Fans shouldn’t find it hard to sit in front of the TV to tune into the show on a Fall night before heading out or staying in for the night. I enjoyed the gloomy and dark vibe to it, it’s as good as you can make a television horror show. The episode closes with the original Exorcist theme music playing as the scene comes to a close. Now that’s a way to end and leave a lasting impression for the following week.