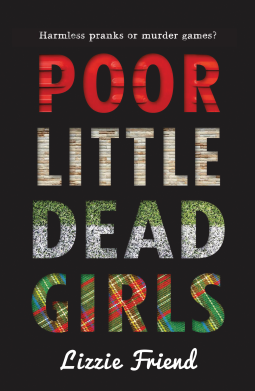 Reading “Poor Little Dead Girls” and actually getting a chance to interview the author have definitely been one of the highlights to start off my year. Being a ‘thrillerholic’, I loved the suspense and strong storyline that this book had to offer and I got a first hand look at how the author wove the novel together to make it the kind of epic read it is today. Check out the interview below to learn more about the book!

Q: I’ve been wondering ever since I first saw your book, why did you choose the name “Poor Little Dead Girls”?

A: To be honest, I didn’t! My agent came up with it, and it stuck. My original working title was “The Legacy” but that never seemed right. Poor Little Dead Girls may be a little heavy, but it’s certainly memorable.

Q:What made you decide to write a book about a secret society?

A:  I’ve always loved secret societies and political conspiracies, and I just think they’re a lot of fun. When I first set about trying to write a novel, I had a lot of starts and stops—I’d think of an idea I loved, then get bogged down with research or start second-guessing myself and my premise. What I found was that I was spending a lot more time thinking about what kind of book I should write, or what kind of book might sell, and very little time actually writing. After that I just sat down, forced myself to think about the book I would have the most fun writing, right now, and Poor Little Dead Girls is what came out. I’m not sure what that says about me, exactly, but I do love a good melodramatic, slightly over-the-top murder mystery.

Q:  Did you have to do any research prior to writing “Poor Little Dead Girls”?

A: Since it was a contemporary, PLDG didn’t require as much research as some other books might, but I still did a lot of research simply because I enjoy it. I love a Wikipedia black hole, and I can’t get enough of the historical groups that have led to all of our modern mythology about secret societies. I’m also really fascinated by the idea of mob mentality, and how easily our thoughts and actions can be influenced by our surroundings. More generally, I did a lot of reading on boarding schools and the history of the area where Keating is located. I particularly loved looking into some of the famous UK boarding schools—Eton, Winchester, Harrow, etc.—and I’ll say that Keating has nothing on those places. At least the Order never publicly spanked anyone.

Q: Would you choose the same choices Sadie did if you were chosen to be a part of a secret society?

A: I’d like to think I wouldn’t have been as easily manipulated as Sadie was. No one wants to think they would look the other way for as long as she did, or ignore such obvious clues that something in the Order was deeply, deeply wrong, but like I mentioned above, mob mentality is a really powerful and really scary thing. I don’t think you can be sure how you would react until you actually experience it.

The Stanford Prison Experiment is a great, but particularly disturbing example. Two groups of students were designated as either guards or prisoners in a mock prison set up on campus in the ‘70s, with the hope of studying how the various subjects were affected by their roles. As it turned out, things spiraled out of control so quickly, with guards voluntarily subjecting the prisoners to mounting psychological torture, some of the prisoners turning on each other in order to prevent or even facilitate the torture, and the experiment’s proctor allowing it all to happen, that it had to be shut down. The study is controversial and the results have been challenged in various ways, but it still poses some interesting questions about who we are, who we think we are, and what we’re all really capable of under the right circumstances.

Q: Are the characters’ personalities all fictional or are some based off of real people?

A: I may have had some real-world inspiration for certain characters, but I’m going to keep quiet about specifics in order to protect the innocent and the related-to-me. 

Q: Did you know from the beginning how you were going to end the story?

A: I had a loose idea of where I wanted the ending to go, and I had a few rules in mind having to do with how things would play out, but the ending itself changed many times throughout the writing process. The final book looks almost nothing like my first draft, but that’s definitely a good thing.

Q: When your novel becomes a movie, who would you choose to act the part of: Sadie, Teddy Cranston, Finn, Jessica, Thayer, the Everleigh twins and Sadie’s mother?

A: I love the use of “when” here—one can only hope! This is a tough one. I like the idea of someone like Chloe Grace Moretz for Sadie, someone who’s beautiful but not too delicate and has tons of attitude. Jessica would need to be a teen version of Anna Kendrick, and Finn could be someone like Evan Peters—good-looking, but with a steady underlying current of sociopath. As for the others, I’m just not sure, although while I was writing the twins, I always pictured Kaya Scodelario.

Q: If a secret society like the one in your novel ever existed, do you think that they’d achieve their goal of world domination?

A: Not even close. I think these kinds of conspiracies are fun, but ultimately really silly. There are a lot of people who are out there for themselves, but I think Arendt’s theory about the banality of evil is mostly true. There are certainly politicians who make moves that are motivated more by greed or personal ambition than any pursuit of greater good, but they’re just working within the system we’ve created for them. There’s no evil mastermind, and there’s no grand plan—there are only people looking out for themselves and their own interests with varying levels of morality to keep things in check.

Q: After reading “Poor Little Dead Girls” I have to know, what is the secret to maintaining suspense in novels?

A: I’m flattered at the question, but I can only answer with my experience as a reader, and with the guidelines I tried to apply when I was plotting the story. I think one of the keys to suspense isn’t so much about the mystery itself, but rather the characters and what kind of connection the reader forms with them. The stories that have really grabbed hold of me have always been those where I felt like I had a strong personal stake in what happened. If I care about the characters and what they’re going through the way I would a friend or family member, a good mystery with lots of suspense is almost excruciating. That’s when the reading gets really, really good.

Q: Are you currently working on any new novels?

A: I am! I have a few projects in the works that I’m having a lot of fun with, but I’m not sure which will be my next published work. Hopefully that’s something I’ll know more about soon.

Q: What do you do to get the “creative juices” flowing?

A: Nothing motivates me to write more than reading, but I draw from all kinds of stories, whether on TV, in movies, or even the news. I also really love listening to podcasts. Some of my favorites are This American Life, Planet Money, and Stuff You Should Know—I’ve taken tons of story ideas from various episodes.

Q: Who is your favorite author and what would you say to them if you ever had the chance to meet them?

A: Another tough one, but two of the authors I am most excited about right now are Gillian Flynn and Maria Semple. If I were to meet them I’m sure I’d giggle nervously, awkwardly shake their hands, and then mutter something unintelligible before running away. There’s a reason we writers bury ourselves in laptops instead of actually hanging out in the real world with real people.

Q: Are you a fan of Lifetime movies?

A: I can’t tell you how much I love that you asked this question, because I think I have an idea of why. I love an awesomely terrible Lifetime movie—the more ridiculous and melodramatic the better. I tried to mimic some of the elements that make those kinds of movies so much fun when I was plotting Poor Little Dead Girls. Sure, it’s completely insane plot-wise at some points (many?), but stories don’t always have to be about realistic experiences. One of the things I love about thrillers is that you don’t always have to take everything too seriously. You can have a lot of fun while you’re killing people off and otherwise wreaking havoc inside a fictional world.

Q: What message did you want to leave your readers with when you wrote this novel?

A: I wish I could say there were some larger lessons hidden within the book, but the only thing I really set out to do was write something exciting and entertaining. I also wanted to make sure I wrote a female character who wasn’t just a doormat, or a prop who would look pretty while scary things happened all around her. Romance angle or not, Sadie was always going to be the one saving the day in the end.

Big thanks to Ms. Friend for taking the time out of working on her upcoming book to answer these interview questions. And yes…I also love watching awesome terrible Lifetime movies. Lol!

0 0 0
Previous ArticleRead of the Week: Hung Up by Kristen Tracy
Next Article2014 Producers Guild Award Winners