Read of the Week: Hung Up by Kristen Tracy 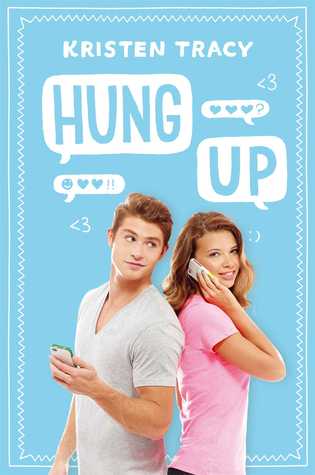 Can you fall in love with a voice? This witty romance, told entirely through phone calls, chronicles the tale of a wrong number gone right.

It all started with a wrong number. The voicemails Lucy left on James’s phone were meant for someone else—someone who used to have James’s digits. But then when James finally answers and the two start to talk, a unique bond forms between the two teens.

Gradually Lucy and James begin to understand each other on a deeper level than anyone else in their lives. But when James wants to meet in person, Lucy is strangely resistant. And when her secret is revealed, he’ll understand why…

Every now and then, the literary world presents us with a book that’s been done before, but is still, evidently so, out of this world. Hung Up is that book.

Hung Up takes place one-hundred percent over the phone. There is no fun girly sleepovers talking about the boy Lucy’s met over the phone, or any intense basketball game where James accidentally brings up the girl who dialed the wrong number and ended up with him. We only know what Lucy and James tell each other.

No thoughts or hushed whispers, just words exchanged over the telephone line. And I love, love, love that style. Something about it just feels so old-school, and it’s great.

We’ve all come across the story before; two teens accidentally meet online or over the phone, and end up falling in love, but I can say that I’ve read those stories and they’ve never been done this way.

We get to learn about our characters only as they tell us about themselves, leaving all the other interesting aspects an irksome mystery until proven. And yet, there managed to be character development. Signs of a great writer come from little things just like this.

James and Lucy talked, walked, and were typical teens and I loved that. Lately writers seem to be upping the expectations and age maturity of their teen protagonists, which is doing weird, weird things to their stories.

While Hung Up was short, Kristen Tracy gave both her characters time to develop and explore before rushing into anything, something that it starting to irritate me to no end. Writers these days aren’t giving their characters time to breathe, and it’s impacting plot more than they’d all like to think.

I admired that while most of James and Lucy’s conversations were funny and sweet, things got serious every now and then and we were eventually able to delve that much deeper into each of their own unique worlds.

Hung Up leaves readers in the perfect position of hopefulness and expectancy, another thing we all need.

I think some of us are starting to forget that happy endings, and happiness in general, are alright, every now and then.