Throughout most of Hollywood history, it has been usually taken for granted that transgender characters would be played by cisgender performers. Even in the most well-intentioned cases, these films can result in stereotypical and surface-level depictions of transgender people. In recent years, however, we’ve seen a huge shift for the better. Trans performers have been using their increased visibility to advocate for themselves and their peers. And the contrast between inauthentic and superficial portrayals of trans characters by cis actors with more nuanced and engaging work by trans performers has managed to push things forward remarkably for trans actors working in the American film industry.

That said, this movement often overlooks a key component: representation behind the camera, as well. If a film has a trans actor playing a trans character that is still written, directed, and otherwise completely brought to life by cisgender creatives, it can run the risk of still coming across as inauthentic or close to it. Seeing trans actors languish in clichéd stories centered around the social angst of coming out, or being stuck in the stock roles of “forbidden object of affection” or “quirky friend,” might still be an improvement on some level. But when trans creatives are able to tell their own stories on a narrative level, we all benefit by experiencing new and original perspectives rarely seen by the general public.

In celebration of transgender trailblazers behind the camera, and to encourage Hollywood and the film community to give more opportunities to trans creatives in all areas of filmmaking, here are some interesting and notable films directed and/or written by transgender individuals.

Lana and Lilly Wachowski are, at the time of this writing, almost certainly the most famous transgender writer/directors in the world of film. The films were made before either sister publicly came out as transgender, but they are inundated with brilliant and layered trans and queer subtext. The original Matrix trilogy represents some of the most ambitious and exciting sci-fi filmmaking around, and the fourth installment (directed by Lana only last year) doubles down on themes that resonant deeply with the trans experience. The whole Wachowski filmography is fascinating and unique, but The Matrix is a great place to start, as it’s a work by two trans filmmakers that has permeated almost every aspect of pop culture since its 1999 release.

Directed and written by Isabel Sandoval and available to stream on Netflix, Lingua Franca is a masterfully intimate drama following the daily life of a Filipina trans woman in Brooklyn, played by Sandoval herself. The film looks unsparingly at the anxieties of being both a trans woman and an undocumented immigrant, but it doesn’t stop there. The film also emphasizes the challenges and rewards of providing care for the elderly, as it depicts a complex romance with sensuality and sensitivity. Sandoval proves that films about trans people don’t have to be just one thing, a reminder of how beautifully multifaceted humanity truly is.

Directed and written by Silas Howard and Harry Dodge, By Hook or By Crook was unavailable for a number of years after its 2001 premiere at the Sundance film festival. But this early and scrappy low-budget queer buddy road-trip film is finally and thankfully accessible for digital rental. A groundbreaking work by two trans men, this partners-in-crime story gives an essential window into queer life 20 years ago, a very recent time that already feels like history because of how much has changed. Yet the film is also bracingly immediate because of how much has stayed the same. As a reminder of the importance of queer camaraderie, its importance certainly is timeless.

Accomplished director Sydney Freeland has directed other film and TV work that directly deals with the trans experience, but with Deidra & Laney Rob a Train (available on Netflix), she teaches us something just as important: trans people should also be allowed to make fun, silly, and entertaining films that don’t necessarily have to do with being trans at all. With the shenanigans of a Disney Channel film mixed with an astute political point of view on lower-income life in America, this is a great film for families to watch together, with ample opportunities for amusement and discussion.

Susan Stryker is one of the most prominent transgender historians in the world, and in Screaming Queens (which she co-directed), she covers a little-known and under-discussed event from one of the most significant periods of queer history. Compton’s Cafeteria was a spot in the Tenderloin district of San Francisco where trans women, drag queens, and other gender-nonconforming individuals would meet in the 1960s. When police raids and harassment reached a boiling point, the queer customers of Compton’s fought back, setting the stage for the Stonewall Riots years later. This documentary delves into this significant event in detail, letting the trans people involved tell the story in their own words.

Sometimes the best way to make an uncompromised work of art is to go outside the system, and this bold and fun film written and directed by Samuel Shanahoy (which you can watch for free on Vimeo) has a definite outsider quality to it, with performances and environments that feel heightened, handmade, campy, and authentic all at once. This tale of a bored suburban teenager’s new metro card opening them up to a wonderful but dramatic urban world of queer discovery and friendship is bound to be relatable to anyone who remembers or is currently experiencing the vibrant and awkward years of adolescence.

Aiming to analyze trans representation on film over the history of film itself, Disclosure (directed by Sam Feder and available on Netflix) often brings to mind works like The Celluloid Closet in its clip-show style, interviewing various trans celebrities about some of the most famous images of trans people in film and television, and analyzing how those images have impacted society. The interviews sometimes feel limited, other times illuminating, and the level of transphobia depicted over the course of the film can sometimes prove exhausting. However, as a widely available resource for cisgender viewers to educate themselves on the history of trans representation, Disclosure is an indispensable film.

A sometimes dark, picaresque adventure starring a cast of endearing misfits with some fantasy elements sprinkled in, The True Adventures of Wolfboy (written by Olivia Dufault and available to watch for free on YouTube) feels more like an adaptation of a book by the likes of Neil Gaiman or Lemony Snicket than its own screenplay. Another great example of a film that could be entertaining for anyone, with characters crying out for their own Hot Topic merch and entertaining supporting performances from name actors like John Turturro, but also a sweet central story and a compellingly-written trans girl played by Sophie Giannamore, who becomes a co-protagonist with the titular character.

This ambitious upcoming documentary directed by Chase Joynt and based on 2019 short film recently premiered at the 2022 virtual edition of the Sundance Film Festival. Framing Agnes features re-enactments of historical medical interviews with trans people as a jumping-off point to discuss complex and fascinating questions about representation, visibility, and the true diversity of the trans community. Often feeling like a counterpoint or natural follow-up to Disclosure, this is a film where trans voices are front and center from beginning to end, carrying on an inter-community dialogue that general audiences rarely get to see on film.

After languishing without distribution for almost a full year following its early 2021 Sundance premiere, We’re All Going to the World’s Fair (directed and written by Jane Schoenbrun) opens in limited theaters today and will be released nationwide on April 22nd, 2022. Hailed by early reviewers as eerie and socially perceptive, this acclaimed film marks a couple of exciting milestones: a major film from a non-binary writer/director and a horror film by a trans filmmaker. 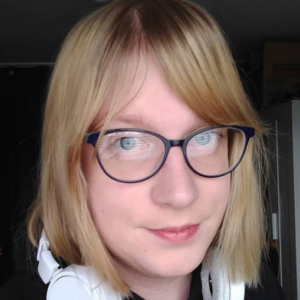