This bone-chilling bit of dialogue is a quintessential example of what fills this darker crime thrill based upon the 1988 novel of the same name by Thomas Harris. The Silence Of The Lambs tells of Clarice Starling (Jodie Foster), a young FBI detective who is given the case of an elusive serial killer nicknamed “Buffalo Bill” (Ted Levine). To aid in catching Bill, Clarice enlists the help of the infamous Dr. Hannibal Lecter (Anthony Hopkins), an incarcerated killer whom is also a psychiatric genius and notorious cannibal. “Buffalo Bill” is known for kidnapping specific women, starving them, killing them, then skinning certain portions of their body (what is especially scary is that though the character of Buffalo Bill is fictional, he is based upon serial killers that actually did exist… one of which being the infamous Ed Gein). He plans to create a “woman-suit” and ultimately make a full-gender change. After Bill had finished with one of his victims, Agent Starling and her fellow detectives recover the body. Upon its autopsy, they find a peculiar moth (the one seen in the picture to the left) lodged down her throat. This moth, not native to the area that Silence Of The Lambs occurs in, was being grown by Bill in his home. But why?

The performances given by Foster and Hopkins were the film’s driving forces and landed them each an Academy Award for  Best Actress and Actor in leading roles. The Silence Of The Lambs also won an Academy Award for Best Picture. This, of course, is believed by many to be from the performances given by the film’s two leading roles. The widely known scenes of the conversations held between Clarice and Dr. Lecter provide the movie’s intense and sophisticated mood that keeps the audience intrigued and mildly terrified throughout its duration. Anthony Hopkins makes a startling and fantastic portrayal of Dr. Lecter that made him a world-renowned horror icon. After seeing this film, many place Lecter among the most popular killers in film. Others in this category would be Freddy Kruger, Norman Bates, Leatherface, and Jason Vorhees. In Review: Silence Of The Lambs is an exceptional film. The acting performances drove the film to greatness. Of the roles, the most powerful was that of Anthony Hopkins’ disturbing and iconic performance as Hannibal Lecter. Parents, you might want to save this movie for the older teens. In addition to a scene of nudity, language and its genuinely dark premise, what many teens will have a problem with is this film’s overall sophistication. The only complaint/criticism I could give to this film was its ending. Though the end scene is fantastic, how the story of agent Starling and Buffalo Bill is tied together in a sufficient yet almost anti-climatic fashion. Though no better ways to end the film come to mind, I assure you they exist. 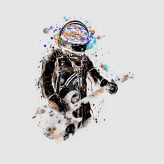