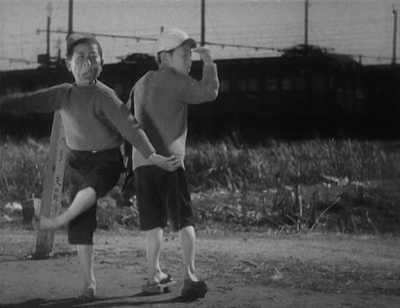 Ozu’s films are so multigenerational, it is often easy to forget just how much of a knack he had for limning the delicate vagaries of childhood. In I Was Born, But…, he presents his funniest, gentlest, most disarming portrait of the attitudes and behaviors of young children, their capacity to tease, disobey, posture, and mimic captured in wonderfully humorous fashion. He understands their wily insolence and naïveté better than almost any filmmaker I can think of: just watch as the film’s two heroes, brothers played by Tomio Aoki and Hideo Sugawara, obstinately worm their way out of going to school, or see how credulously they believe their father, a paltry office worker, is the most powerful father in town. The film parses notions of social status beautifully, nudging these kids’ awareness closer to its disenchanting truths all the time, but not so much that they don’t still find time to scratch their behinds.