‘Tell Me That It’s Over’ review: Wallows have legs firmly planted on the indie-pop ground

The band Wallows has a way of curating an interesting blend of indie-rock with 80s synth-pop instrumentation (with their hint of early 2000s garage rock sounds). Within their songs, their influences speak freely and are tucked in comfortably. But this ability doesn’t seem to have extended over into their new release.

Up until now, Wallows have been able to fuse these sounds subtly. But Tell Me That It’s Over unfortunately falls victim to a lack of cohesiveness, despite how stellar the tracks may stand on their alone.

The record, produced by industry legend Ariel Rechtshaid, set the bar of expectations for this album considerably high. After the success of the band Haim’s Women In Music Pt. III, folks like myself were itching to see what else he can help cook up as a producer in the studio.

And his involvement is clear as day on this Wallows record. Even within the most indie-pop sounding of tracks on Tell Me That It’s Over, the occasional sultry jazz trinket is thrown in (ie: in “Missing Out”) which is like a Rechtshaid calling card. It provides a welcoming experimental texture to the angsty garage-rock sounds that Wallows tend to go for.

“Missing Out” sticks out in the best way possible. It’s the defining track on the record and a slow ride to the finish. The leisure, steady layering of percussion on this song builds on itself the further we go and it’s done expertly. It seems the 80s synth influence is abandoned, begging the question of why Wallows didn’t choose to explore this tactic more within the album. The use of saxophone is without a doubt reminiscent of Rechtshaid’s touch on Haim’s “Summer Girl” and it’s blissful.

But the 80s synths (maybe late 70s in this case) come back barreling through the door almost ironically on the next song immediately after. Despite the break-up lyrics that explore pain and open wounds, “Hurts Me” is a feel-good spring-time groove. Standing alone, it’s exceptional. But it’s a prime example of the lack of cohesiveness present on the record. The track simply doesn’t make sense after listening to the garage-sounding antics of “Missing Out” just previously.

With that being said, the opening track, “Hard to Believe” sets up the record for songs like “Missing Out.” The song creates an image of a grown-up Wallows, a band moving towards experimentation in a subtle and precocious way. With its quirky whistle tones and strings section, those cello/violin sounds are a ridiculously good touch.

The Regerettes’ Lydia Night singing background vocals on “Permanent Price” was a solid choice. Her voice swims in a heavenly direction alongside Dylan Minnette’s and it’s always interesting to see what two musicians in a romantic relationship can conjure up together.

But it’s songs like “I Don’t Want to Talk” that proves the band is still deep-rooted in their LA summer pop, speeding-down-the-highway vibe.

That’s not necessarily a bad thing. Wallows have cultivated a brand that lops together sweater vests, zesty bass lines, and muffled vocals for indie fans everywhere. It’s just interesting to notice their potential had they decided to take a path further down this type of experimentation. Nonetheless, this is their second record, so maybe that’s asking too much.

Tell Me That It's Over - Wallows 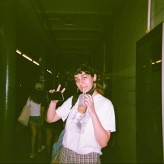