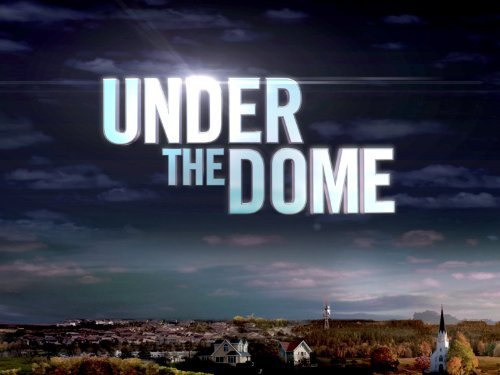 In Under the Dome‘s newest episode, Blue on Blue, a series of events take place that terrify, enlighten and induce momentary madness to the citizens of Chester’s Mill.

Citizens of Chester’s Mill are reunited with their loved ones thanks to the army. Although, they can’t physically touch them (I really felt it for Deputy Linda and her fiance), they interact in numerous ways (sign language, notepads, Windows tablets, etc.) to get their general feeling across to their families.

However, Barbie finds out from a random soldier on the outside that Chester’s Mill is scheduled to be blown to pieces by MOAB (Mother of all Bombs) in hopes of destroying the dome. Thanks to Julia – the news reporter girl- everyone in the town is now aware that their families hadn’t come to just visit but to say goodbye. This type of news kind of tends to scare the shit out of people but before anyone can start up sets of hysteria, everyone is herded to an underground haven by Big Jim which will hopefully spare them from the destruction to come.

Meanwhile, our beloved little Angie is still locked up in the Rennie’s bunker unaware of all that is happening. I could’ve told you for free that Big Jim, after finding out about his son’s dirty psychotic secret, wasn’t going to set her free. I mean, it’s his son after all. So I’m guessing he felt the need to protect him from whatever consequences that a guy who is obviously not on Sanity Rock, deserves.

On another beat, Julia tries to deal with the pain of thinking that her husband had left her because of his gambling addiction when actually, he was six feet under and probably rotting by now. And Barbie was still unsure whether or not he should confess to murdering Julia’s husband since their world was gonna be blown up and all.

Yet, Julia isn’t the only one dealing with a harsh reality. Norrie, one of the seizure teens and who might just be one of my favorite characters, has more than a hard time coming to terms with the fact that her father did exist (no duh) and was capable of being found all these years unlike what her mothers had said.

While all this is happening, Big Jim finally decides that he’s going to set Angie free only on the basis that he believes she should “die a free woman”. Confused and out of the loop, Angie, doesn’t miss a beat as she rushes out of the dilapidating shelter and makes a run for her house. Unfortunately, her brother is out tailing a very hurt Norrie and their parents are outside the dome. And guess who just so happens to be waiting for her in her room with a gun? Her mentally disturbed ex-boyfriend, ofcourse.

Admist all the personal conflicts and fright, everyone holds their breath for the imminent destruction of Chester’s Mill. Barbie, Julia and the other residents dote on their final moments. Angie and her psychotic ex-boyfriend await their demise. Deputy Linda reminisces a more peaceful time in her life. And Norrie and Angie’s brother, Joe, kiss as the glare of the bomb makes the perfect sadistic Hallmark card.

Fortunately or unfortunately, the doomsday bomb is a dud and instead of destroying Chester’s Mill, it ricochets and causes mass destruction on everywhere that is in close proximity of the small town.

As the episode comes to an end, the show has left a couple of questions answered but the real important ones are left to simmer on your mind. Like, although we now know that Big Jim and the pastor were involved in some kind of drug business, what does the propane have to do with anything? And now that Norrie and Joe have figured out that they can touch without going into seizures anymore, what caused it in the first place? Will Julia ever forgive Barbie when the truth comes out? What’s to happen with Angie and her nut-head ex-bf? Why are butterflies attracted to a particular side of the dome? What will the next big crisis be in this once serene town? And the mother of all questions, what the hell is up with that dome?

I hate being left in the blind zone but can’t help be thrilled by the fact that there’s so much more to come from this epic Sci-fi show. And by golly, I wanna witness it all.