Read of the Week: The Beautiful and The Damned by Jessica Verday 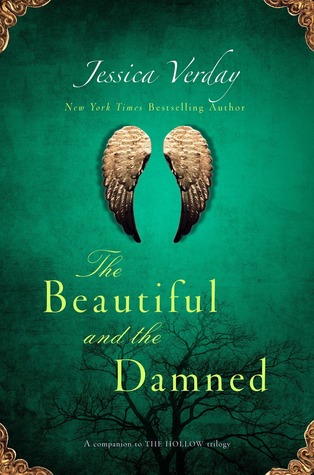 Cyn and Avian are far from a perfect match. She’s a witch who casts spells on men so she can steal their cars. He spends his time being judge, jury, and executioner to the truly evil in the supernatural realm.

When the blackouts Cyn’s been having ever since her time in Sleepy Hollow start escalating, she finds herself unable to remember where she’s been or what she’s been doing. Frightened, she seeks guidance at a local church, and it’s there she meets Avian.

The unlikely pair soon discovers that her blackouts are a side effect of what she truly is—an Echo—a conduit for souls of the dead. The only way to prevent Cyn from losing complete control is to return to Sleepy Hollow and vanquish the source of her power—but she may not survive the process. And if she does? She won’t ever be the same…

I’d like to start this review by pointing out that I am the ultimate fan of Jessica Verday’s The Hollow series. I followed the trilogy from start to finish, rereading all three back-to-back time and time again. I hate when people ask if I have a favorite book or series, but there are times when I must relent, and this is certainly one of them.

The Hollow trilogy is one of my favorite, possibly the favorite, book series. There, I’ve said it.

When it comes down to being asked about supernatural read recommendations, even two years after the series’ conclusion, these are the first I go for.

Luckily for some, reading The Hollow isn’t necessary to read and fully understand The Beautiful and The Damned.

Taking place after events that occurred in The Hidden, The Beautiful and The Damned introduces us to Cyn, expert in grand theft auto junkie and unknowingly possessed by a very grumpy dead guy. Fleeing from Sleepy Hollow after maybe-maybe-not killing her ex-boyfriend, she stumbles upon the half angel, half demon, Avian, in New Hampshire, where she takes refuge. The two must come together to put an end to the havoc that the spirit inside Cyn is causing before said ex-boyfriend’s cop brother finds her and takes matters into his own hands. The catch? The need for a road trip back where everything began: Sleep Hollow, New York. *cues fangirlish squeals of Fangirlism*

Granted, The Beautiful and The Damned is bound to bring up The Hollow talk, but these two couldn’t be any more different. Completely different people, completely different place, and a completely different scenario. The twist Verday put on religion and Revenants was extremely fascinating and worked wonders for the story at hand. Her depiction of Echos was fun to learn and understand, which really made the story stand out to me among the supernatural genre as a whole. As usual, Jessica’s managed to make something completely original in a popular genre that just keeps growing newer and better things.

Much to my surprise, Cyn and Avian were far from a romantic couple. These two really got the chance to know each other and had more of a normal friendship than anything else. It was refreshing to find a pair of people in YA who can handle just being friends and easing up the playing fields before trying any romantic involvement out. Don’t get me wrong, there’s still plenty of steamy moments between these otherworldly beings, just enough to tease, really, but there was a lot more of consolation between the two than romance.

Action is something I haven’t seen much of before from Jessica, but she made it work for The Beautiful and The Damned and most of my favorite scenes happened to be fight sequences.

Verday delivers an insanely mind boggling ending, featuring a cameo of our favorite Sleepy Hollow occupants and all, that leaves readers guessing what may be coming next. It’s unclear whether there are any plans to turn Cyn’s story into a series or just leave The Beautiful and The Damned as a stand alone, but I certainly do hope she chooses to continue down Cyn and Avian’s questioning future.