This show just seems to keep befuddling me. Right when I think that I’m about to understand the show, I’m stumped by some new incident that leaves me in the dark all over again. It’s a kind of emotional abuse that I just can’t seem to walk away from.

In episode seven of The Leftovers, dear old granddad returns from the looney bin as he comes to Jill’s rescue when she gets stuck in an old fridge in the woods. Apparently, Jill and her friends were hanging out in the woods by an old fridge. The legend is that a kid got trapped in the fridge as a practical joke and was never seen or heard from again. Then Jill and her friends decide that it would be a great idea to see who lasts the longest inside the creepy abandoned fridge. I don’t think I could ever imagine what it’s like to be locked in a rusty old fridge with a freaky history. On top of the fact that I’m slightly claustrophobic, the first thing that would enter my mind is whether or not the damn thing would open when I’m ready to get out. Unfortunately, that’s exactly what happens to Jill. When her friends pulls the handle to let her out, it breaks off. Panic ensues faster than you could say “Oh shit.” Thankfully, Grandpa Garvey appears out of nowhere in his night robe and breaks Jill free from the rusty grips of the fridge. His one request is that Jill doesn’t tell her father that she saw him.

While Jill is off playing dangerous games, Kevin is getting his game on with Nora. After Nora comes back from her convention where she gave up all her pain to Wayne, she and Kevin have been closer than ever. However, with Kevin’s divorce and everything else happening in his life, he can’t seem to wrap his head around the idea of being in a relationship with someone other than his wife. This uneasiness shows at the end of the episode when he and Nora are about to consummate their relationship. 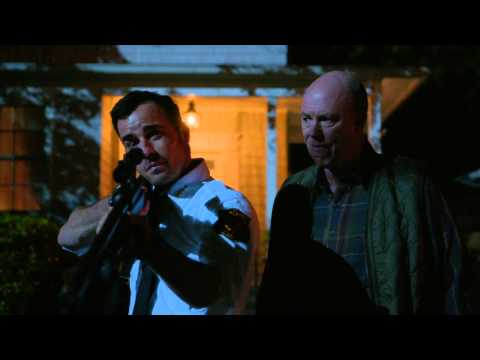 Meanwhile, Tom is dealing with his own screwed-up situation as he tries to get an audience with Wayne. Christine is eight months in on her pregnancy now and is really sick. Tom decides that he can’t wait on Wayne to make a decision and heads to a nearby pharmacy to find anything to help Christine. A pharmacist asks him what he’s looking for and when he tells her, she says that he should carry her by her obstetrician. Obviously, Christine doesn’t have one and after the episode at the hospital, I doubt Tom would risk carrying her back there. Instead, he continues looking for medicine that might be able to help. That’s when the phone Wayne gave him rings and Tom hesitates before picking it up. It’s Wayne and, without so much as a greeting, he instructs Tom to take half of his money and place it under a particular mailbox. After not hearing from Wayne for months, Tom is absolutely livid but still obeys the orders given. However, instead of just dropping the money and leaving, he waits around to see who comes and picks up the money and then trails them. He trails this man all the way to an apartment and figures out that he’s not the only one with an Asian girl who’s pregnant for Wayne.

Tom isn’t the only one confused. Laurie is in a constant fight with her emotions as she tries to not feel anything when she sees her daughter or when she hears that Kevin is sleeping with Nora. Still, it’s so clear that both of these things unnerve her. Yet, she remains as loyal as ever to the Guilty Remnant.

Surprisingly, the GR responded when the face of their fallen comrade is spread all over the town with the words “SAVE THEM” typed underneath her face. The Guilty Remnant is a group of individuals that hardly react to a slap in the face or being sprayed with a hose from some irate person they’ve probably been following around. So, it’s really surprising when they react to the posters stuck up all around town. They even go as far as protesting against the posters by spray-painting the word “DON’T” above the words “SAVE THEM.” Later in the show, it’s revealed that Matt and what’s left of his church are the ones putting up the posters.

However, nothing can trump what poor Chief Garvey has to deal with in this episode. On top of the fact that his wacko father has escaped from the nut house and is on some weird-ass mission, Kevin has been having dreams that don’t seem to be dreams at all. He dreams that while waiting up for an update on his father’s whereabouts he hears a dog whimpering at the door. With curiosity and a gun in hand, he opens the front door and sees the twisted guy who is always shooting dogs. The guy calls Kevin over, says that he’s got a dog stuck in the mailbox and hands him a gun. At the same time, Kevin hears Tom call out for him from inside the house but when Kevin turns around Tom shuts the door. Kevin takes the gun and prepares to shoot the mailbox. Before he can pull the trigger, he remembers the times that he shot dogs and refuses to do it anymore. Instead, he walks over to the mailbox and opens it. That’s when he wakes up and finds himself on his bedroom floor with a dog bite. By now, I’m convinced that Kevin’s on a seriously messed up acid trip. But it doesn’t even end there. Apparently, the dog from his dream is tied up in the backyard and Aimee is the only one who remembers what happened.

After discovering the hole in his backyard with a jar of money for Matt, Kevin calls up the pastor and figures out that Matt is the one who has been providing sanctuary for him since he escaped. Matt tries to get Kevin to meet him and his father at a café so his father can try and explain some things. However, this meeting goes south after Kevin denies a National Geography book that his father gives him and his father slaps him. Apparently, the book is a clue as to what “they” (the spirits or whatever Kevin’s father is seeing) want Kevin to do. Without hesitation, Kevin locks his father up and is once again completely overwhelmed by the events in his life. Thankfully, he decides to dump all the pills he was taking.

At the end of the episode, Tom finally returns to Christine. However, she’s not in the bed where he left her. Panic immediately takes over and he follows the trail of blood to the bathroom where a weary Christine is in the bathtub cuddling her newborn baby girl.

As we get even closer to the mystery behind what’s really going on, I can’t help but wonder: what else is going to happen to poor Kevin? Why is Wayne breeding Asian girls? What’s up with Kevin’s crazy father? Is his father really crazy?

I guess I’ll just have to wait till the next episode.