In this week’s episode of Under the Dome, new developments are made, more mysteries emerge, and Big Jim continues to be… well… Big Jim.

As the show opens, Barbie wakes up from a nightmare about Sam’s supposed suicide. He’s obviously shaken up about it and Julia tries to comfort him while trying to understand more about Pauline’s (Junior’s mother) journal. Eventually, Barbie and Julia go break the tough news to Junior. As shocking as the news might have been, Junior should’ve known what happened to Sam after he asked whether or not Sam was alright. I mean, was he not present for Joe’s moment of despair when he found out Angie was murdered and Joe asked that exact question?

Anyway, Barbie, Julia and Rebecca head down to the cave to try and find Sam’s body so that they can give him a proper burial for Junior’s sake. However, when they throw a flare down the hole to see how deep it really is, they don’t hear when it lands (or if it even landed). Even weirder, Rebecca’s compass is off and is facing every direction at once. Barbie decides that it’ll be better if he puts on rock climbing gear and heads down the dark, eerie pit. Instead of uncovering anything, he gets pulled deeper and deeper into the hole as if some magnet is pulling him closer into the dark unknown. Then, his anchor breaks from the stony wall. Julia and Rebecca try to hold onto the rope but aren’t strong enough to pull Barbie up and are being pulled over, too. Barbie makes the hard decision and cuts the rope. He falls into the endless darkness and with only Julia’s piercing screams to follow him.

Meanwhile, Junior tries to deal with the grief of his uncle’s death and the fact that he murdered Angie. He asks Melanie if his uncle was always a bad person, and she tells Junior of how unbelievably nice Sam was (when she was alive, of course). Big Jim overhears their conversation and can’t believe that Sam is really dead. What upsets him even more is the fact that Barbie never told him. Jim’s megalomania seems to still be present as he tells Junior that with Barbie gone the town needs him and Junior now more than ever.

Julia is still of the belief that Barbie is dead but is adamant to go back down the never-ending hole to find out what happened to him.  While she’s doing her investigation, she asks Rebecca to not tell Big Jim about Barbie’s death.

When Barbie wakes up in a playground with all of his cave climbing gear on, it’s really no surprise that the supposedly endless hole leads to the outside world. And if Barbie is alive, then that means Sam is, too. Unlike Barbie, Sam already knows just where he is. He heads to a psychiatric institution and asks for his sister. For a second I believe that she’s locked up because of her paintings and her theories about them, but later it’s revealed that she’s only an art instructor. She’s absolutely flabbergasted to see Sam again and hugs him.

Back in the dome, the Four Hands and Julia try to understand Barbie’s supposed death. Joe is strong on the belief that the dome wouldn’t allow Barbie to be easily killed since he’s their monarch and all. He’s also sure about the fact that the endless pit wasn’t there from before. They all agree that they need to know what’s down there. And Joe – having conveniently been a member of the robotics club in high school – creates a robot that would be able to do just that for them. Unfortunately, the robot glitches out before it can go any further than twenty feet. Even though they lose the robot, Joe picks up the last few moments of video the robot recorded before it disappeared and it shows a playground and trees.

As soon as Rebecca reaches home, she is accosted by Big Jim and threatens to tell him the truth about Barbie’s whereabouts… or else. Of course, she spills the beans. I think the events in the show have really put Karla Crome’s character, Rebecca, under a lot of stress. She never seems to get a break from any drama and this is probably why she comes up with crazy, fatal ideas.

Meanwhile, Barbie is back at his old apartment trying to catch his bearings. Before he can even properly attend to the parts of his body that are bruised and bleeding, men with guns burst through the door. Apparently, these men hired Barbie to help them break into the house of the founder of Aktaion Energy and get some important info that would make them all rich. Unfortunately, they don’t seem to be buying Barbie’s whole “I got stuck under the dome” excuse and demand that he finish the job. After a few punches and kicks, Barbie agrees.

Sam and Pauline catch up on Sam’s appearance. Of course, Sam asks why she decided to tell Junior and not him. She says that she thought the dome would follow her and she didn’t want anyone to hold her back from leaving. Still, I believe that she is playing Little Miss Innocent to buy herself more time to understand how Sam’s presence is possible and whether or not she can trust him. After all, she did tell Junior to only talk to Lyle. She must’ve felt that anyone else would be a threat. 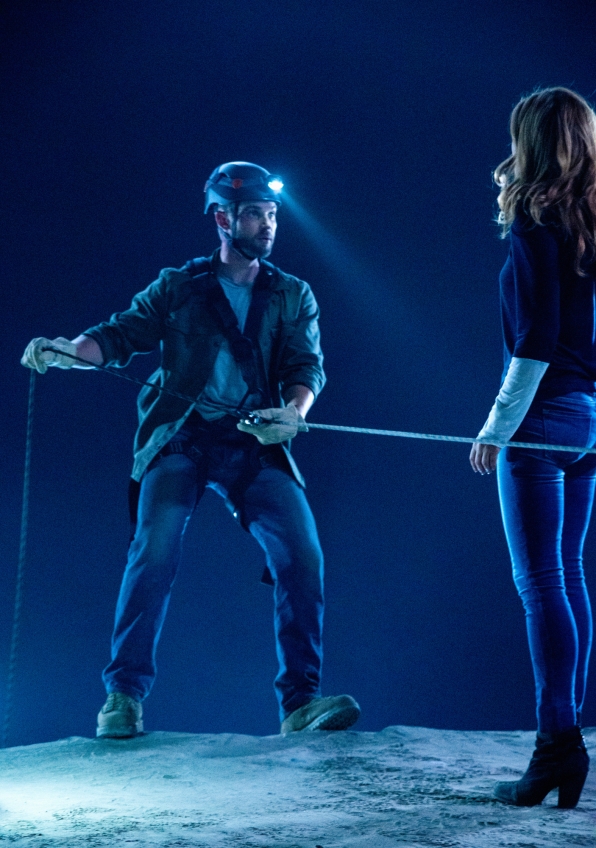 Back on the outside of the dome, Barbie and his comrade in crime approach a house with guns out. Right when they’re about to enter the home, Barbie types in the wrong security number and the alarm goes off. Immediately, security is at the scene. A man walks out of the house and Barbie acknowledges him as his father. As he and his father catch up, a little of Barbie’s non-criminal life is revealed. However, Barbie is only there to get his father’s help in returning to the dome. Barbie’s father is curious as to why he would want to go back inside the dome when he managed to escape. Plus, the military is set up close to Chester’s Mill and it is impossible to get close to it. Then Barbie’s dad makes a wild guess that it’s about a woman.

On the other side of Barbie’s hometown, Pauline takes Sam to see Lyle who, while managing to also escape, has clearly gone off his rocker. Somehow, the only thing he can say is “Melanie.” Pauline can’t believe that Lyle might be talking about the Melanie they knew years ago, and Sam informs her that Melanie has come back from the dead.

Back inside the dome, Junior and Melanie meet up with Joe, Norrie, and Julia. Before Joe can explain the incident with the robot, the egg starts to glow from inside Melanie’s bag. When Melanie takes it out, it casts a pink hologram of Barbie and Melanie’s hometown as if to say where the never-ending pit leads to.

In Chester’s Mill, Big Jim holds a memorial for Barbie, which might just be authentic but seems more like a way for Big Jim to make his comeback into power. Even Rebecca notices this. At the end of the episode, viewers see a slow motion shot of Barbie and his father walking through a forested area. Behind the path they’ve just walked is a ditch covered with flowers and a handprint; a handprint that looks similar to those of the Four Hands.

Is this the place where the Four Hands of the past buried Melanie? Is this the door back to the dome? Why would the dome create a cave that leads back to the outside world? What’s the true purpose behind this cave? Why not just bring down the entire dome?

I’m really starting to get tired of being left with so many questions and so few answers! I hope the next couple of episodes give some real insight into what’s really going on.