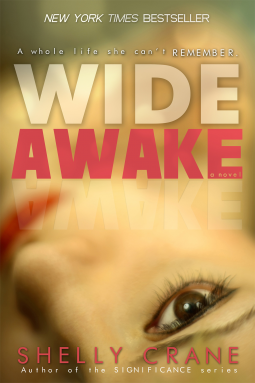 Wide Awake by Shelly Crane definitely proves that a good book is a dime a dozen. When I decided to read the book, I figured that the storyline about a girl who lost all her memory and just woke up from a coma would be an awesome read. It would follow the life of the girl as she rediscovers herself and tries to cope in a not-so-unfamiliar environment. She’d try to remember her family and friends while overcoming obstacles. In the end, she may or may not remember who she is but will accept herself for who she has become and try to move forward.

Unfortunately, nothing of the sort happened. From the time Emma woke up in the hospital, it was all about her relationship with Mason, the physical therapist. Her family is incredibly rich and superficial. Andy, her boyfriend who is also popular and rich, started dating another girl while Emma was in her coma but ran back to her when she woke up. Her friends are mindless airheads who used to rule the school with her and pick on the less popular students (typical Hollywood high school movie shit). They can’t accept that Emma isn’t the same dominating bubblehead she was all those years and desperately pressure her into remembering who she is. When that doesn’t seem to be working, they let her be.

Throughout the whole story, Mason is adamant about Emma remembering who she is before he can agree to be in a relationship with her. However, with no one willing to be patient with her or comfort her when she’s already feeling lost and alone, it’s no surprise that she clings to Mason. He was there for her when she woke up and after. He helped her to, literally, get back on her feet and he was the emotional support she needed when no one else would empathize with her. Of course she would fall head over heels for the guy! She doesn’t remember the people who used to be in her life and he’s the only one she got to know because he was willing to accept her.

On top of this, the author ensured that Emma wouldn’t have any other love interests other than Mason by making Andy’s character a complete douchebag. Andy is the guy who cares about status and how good Emma makes him look. Mason is the guy who is only interested in Emma’s well-being. Andy is a jerk who doesn’t open doors and expects everything to be about him. Mason is the gentleman who is always looking out for her and treating her like a lady. The characters just seemed too one-dimensional and the story seemed to lack depth. It would’ve been more interesting if Emma had a hard time choosing between Mason and Andy. Andy could’ve been a jerk on the outside but on the inside concerned about his family life and scared about his future after high school. Still, I think the story should’ve been more about Emma figuring out her life and remembering who she was compared to being a romance novel.

However, there were some awesome parts of the book that I adored. When Mason gave Emma a book of Useless Facts that was supposed to help her feel normal, she used some of the facts as chapter titles; one of them was that turtles could breathe through their butts. There’s also the fact that her parents come to terms with the person Emma is now and embrace it. Sure, parents can be judgmental at times but they’re still your parents.

Overall, Wide Awake is a novel that should be read if you’re into unusual romance stories and are looking for a light read. If you liked Wide Awake you could check out the rest of the books in the series.

0 0 0 0
Previous ArticleBox Office Report: 'No Good Deed' Does Good Deed for Box Office
Next Article“When I die, f**k it I wanna go to hell,” I’m Ready to Die (A Retrospective)