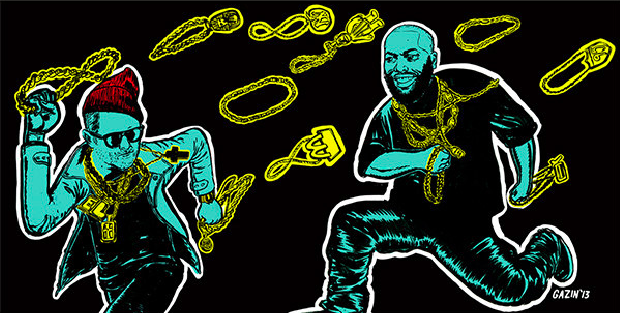 Mother-F*cker, (religious figure). Damn, was I surprised by this album. To be honest, the first album surprised me as well, but I haven’t heard a record this clean in a while. In theory, I believe Dre’s Chronic (2001) is possibly the definition of a perfectly mixed album, and now Run the Jewels come in with an album that’s close for our time. Their second release is a superior addition to their catalogue.

Before I even heard their first album, I never knew who El-P was. Well, maybe if I remembered A-Trak’s “Piss Test” at the time, but I can’t recall. And as for Killer Mike, I only knew him from “Snappin & Trappin” on Stankonia and MTV’s Made. I don’t even know if the latter is even relevant anymore. But after hearing their chemistry on this first album, I couldn’t be happier with what I heard.

The album starts relatively well, with a very bleak instrumental; it kind of reminds me of Halloween. The following track has progression in sound as well as having one of my favorite lines from the album. Killer Mike spits: “Fuck the law, they can eat my dick, that’s word to Pimp.” A fresh nod to Pimp C’s verse in “Where’s Da G’s,” a track by Dizzee Rascal. But the album doesn’t get live until the third track, which is well deserving of being called the best track of the album. I’m talking about the Zack De La Rocha guest, “Close Your Eyes (And Count to Fuck),” which I could geek over so much.

I love Rage, but I only saw two standouts, and those for me were Zack and Morello. Zack’s rhythmic skills are undeniably strong, and his verse goes in on the track. It’s a track that’s hard to explain. You have Killer Mike and El-P playing off these braggadocios lines blended with some against society type of lines. If you really listen to it, it works in a way where they explain what makes them individuals, but in the long run hate society? Fuck it; the lines are dope, even if it confuses me in lyrical structure.

i.e. I understand the concept, just not 100% where they were going with it.

It’s weird to talk about this album as a whole because it’s subjectively all over the place. Nearing the end of the album, we are given a special Gangsta Boo feature that isn’t as special, but I could say it is quite memorable. The track is more of a melancholy braggadocios track. Its mellow feel is retained by the instrumental. It’s that track where they speak about why they love women, in a sexual way, like a cliche but better. Gangsta Boo comes in more heavy-handed than Killer Mike and El-P. The looping back vocals are also hypnotic, with the recurring “dick in her mouth all day.”

We also see a different side of Killer Mike for a Run the Jewels project, because he never really get so emotionally deep with his verses on the first album, but damn does this bring new light to my ears.

Instrumentally the album has variety: some are very hypnotic, and on the second track, “Oh My Darling Don’t Cry,” the low bass is varied throughout. When it comes to it, it flows, and it’s this uniqueness that gives the album more pizazz. In the opening for “Lie, Cheat, Steal,” all I think about is more cowbells, as soon as El-P’s verse starts. I know I didn’t cover much on the instrumentation, because I’ll be honest, it’s too dope to describe. The album is a nice surprise for them, as they are now the best-overexposed duo – well, in my opinion, that is.

0 0 0
Previous ArticleWatch: Best Horror Heroes of Movies and Television
Next ArticleJon's Movie Review: "Nightcrawler" Will Chill You to the Core