This is the episode where we finally get to learn more about Chang, the quiet yet hilarious inmate who’s been pretty mysterious so far. I like the general structure that this one takes. We basically get to see Chang’s average day right from the moment she wakes up. She’s such a fascinating person to follow; she hides a cell phone out in the shed, where she watches Chinese dramas. While some of the other girls struggle with the prison food, she resourcefully makes patties out of peas and crushed Fritos. She is an extremely observational person, and it breaks my heart that so many people simply ignore her at Litchfield. I really wish she would team up with Soso or even Piper, just so she could have a friend. 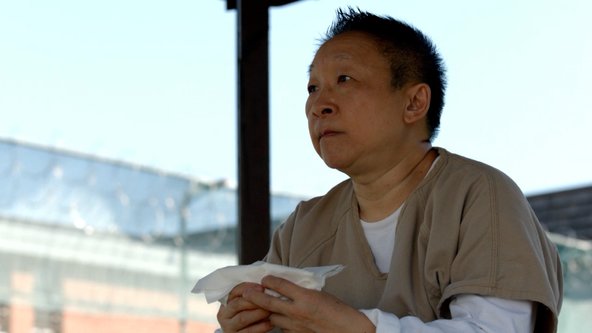 The other plots this episode are about the sweatshop Piper and some of the other girls are a part of. Piper meets Stella, who is said to be a love interest for Piper–and who is going to shake up the relationship between her and Alex. The key theme of this episode is beauty, and we learn what that means for many of the inmates. Piper steals some of the lingerie she makes so that she can feel beautiful. This small action brings up a deeper discussion with Cindy, Janae, and Flaca about the models in the catalog, as Cindy points out the absence of Black and Latina women. This is a simple conversation but a very intriguing one.

One other subplot is Morello attracting suitors by writing to creepy guys and making up a crazy and elaborate story about how she ended up in prison. She does all this in order to earn some money from desperate men. It’s a sad way for the girl to get attention, but it makes her feel good about herself, and you can’t help but feel bad for her that she doesn’t have anyone with Nicky gone. Meanwhile, the fierce Red manages to worm her way back into the kitchen. This may not seem all that important, but it’s sure to be a big deal later on down the road this season.

Getting back to Chang, we learn in her flashback that she was a burden to her brother, who tries and fails to marry her off. The potential suitor is rude to Chang and calls her ugly, which automatically hurts young Chang. The next flashback we see is Chang getting involved in the illegal smuggling business her brother is participating in. Two men enter the store to talk to her brother, and he suggests they take his sister with him when meeting a Korean about a smuggling exchange because his sister is invisible; she was standing there the whole time they were talking and the men didn’t notice her at all. You can’t help but sympathize with Chang, because it feels as if she never is given a chance or even acknowledged at all.

Chang saves the life of her brother’s partner, who then realizes he owes his life to Chang. The next time we flash back to her old life, we see Chang running the business and ordering that her associates cut out the gallbladder of the man who rejected her. In present day, we get to see her in Berdie’s drama class, where the counselor instructs the inmates to act out a short scene from their life. Chang chooses the gallbladder incident to act out, which is surprising and disturbing to the other inmates and Berdie herself. Chang then quickly covers it up and says that she made it up, ashamed that she shared this with them at all. This is important because it tells us why Chang is someone that’s so closed off: it’s safer just keeping her old life to herself.