After watching “Tongue-Tied,” it’s been officially decided that Norma should definitely get her own show. The silent woman has become a God at Litchfield. Some of the women believe that just by Norma touching their shoulders, they instantly feel better. One of the themes of Orange Is the New Black is having something to believe in, and this is evident in this episode in particular. 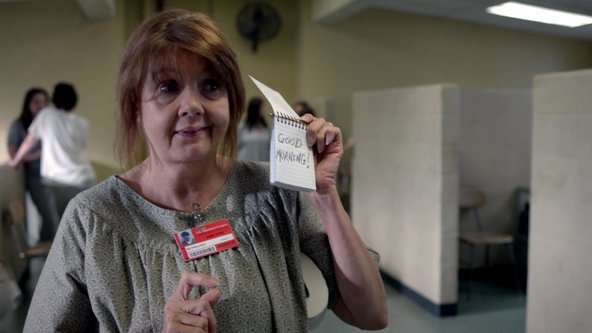 While this is happening with Norma, Piper finds herself desperate to connect with the outside world. She talks to her brother Cal about setting up a website for the panties she’s smuggled from Whispers. Cal informs her that used panties from inmates sell for tons of money. Piper goes a little bit crazy and pretty much harasses the other inmates in an attempt to get them to participate. Pips knows what she’s doing, but I think she’s getting a little too carried away already.

A wedge is placed between Gloria and Sophia when Gloria finds out she lives in her neighborhood. Her son Benny then begins getting a ride from Sophia’s ex-wife and son Michael. Michael begins cussing, and Sophia instantly points the finger at Benny. I think that this situation escalated pretty fast. Just one ride with this boy and all of a sudden your “innocent” little boy begins cussing, so you blame the other boy? Sophia is obviously hurt by her son’s actions, but it’s still wrong to blame someone else. All of the inmates seem to be searching for purpose in this episode specifically.

In the flashback, we learn that Norma has a stutter, which is why she doesn’t speak. She is drawn into a cult, and in the next flashback, we see her getting married to the cult leader. At first, we think it’s just her marrying the man, until another woman steps up and marries him as well. So the dude ends up having a ton of wives. They all carry on and do 60s things for awhile, but then the next time we see them, all the other members of the cult have gone away. They ended up abandoning the leader, and he was ultimately facing criminal charges. He then says some insulting rude things to Norma about her being the only one who hasn’t left him. The guy clearly has a death wish, considering the insults he says while on the edge of a cliff. Predictably enough, Norma pushes him off the cliff, and we can infer that’s the reason she’s at Litchfield.

One of the most interesting parts of Norma’s life in Litchfield is her friendship with Red. The pair work in the kitchen together, but then Red was banned from the kitchen last season and Gloria took over, but Norma still works in the kitchen. Now that Red is back, she is back to bossing Norma around. I have mixed feelings about Red; she’s grown a lot since season one, but she still has that mentality that she has to boss around people who are weaker than her. I don’t like how she takes advantage of Norma. I’m excited to see where this storyline is going to go throughout the rest of the season.

What was your favorite part of this episode? How do you feel about Norma? Did you like her flashback episode? Comment and let me know what you think. I’ll be back sometime tomorrow with my review for episode 8.