In “Fear and Other Smells,” we meet new inmates and new guards, some of which may or may not be a future threat to the other ladies at Litchfield. As always, there’s a ton of different stories happening at once in this episode of Orange Is the New Black. Some of these clearly seem to be more essential to the plot and themes that have blossomed this season. However, I personally find the Piper running a successful online panty store from prison to be pointless and annoying. Her speech to the inmates that was encouraging them to “give me your vag sweat” had passion, but it just came across far fetched and unrealistic to me anyway.

Some of the other subplots that go down this episode include the audience receiving a glimpse into the corporate life. Throughout the first eight episodes, we’ve believed that Danny Pearson is the enemy. He seemingly deliberately thinks that Caputo has good ideas involving how MCC should run the prison, but he fails to make any of the ideas happen. Therefore, we believe Pearson is just shrugging him off intentionally. We learn that Pearson fights hard for Caputo’s ideas and MCC–which his father runs–and shuts them down almost immediately.

While Piper is off making money, Alex is becomes more and more paranoid around Lolly, a familiar face from Chicago, but Piper and Alex know little about her past. Alex is convinced that Lolly was sent by Kubra, the drug dealer she betrayed. This paranoia has been present all season long, but we see it taken a step further this episode. 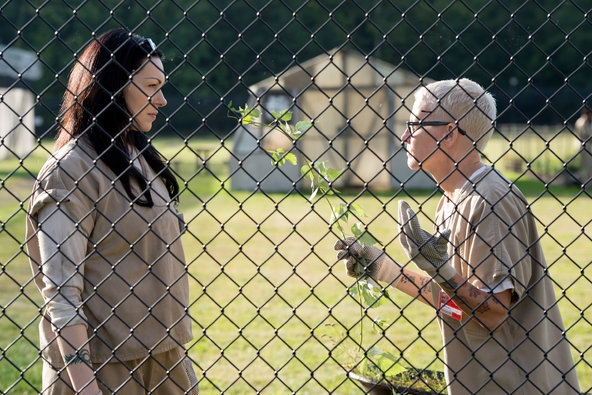 In the flashback, we get to see more about Alex’s drug dealing past and why she’s so scared of Kubra. I wasn’t happy about Alex Vause being more or less the main focus of this episode, mainly because we’ve already gotten the chance to learn more about her through previous flashback episodes. One of the big highlights of this season has been getting the chance to see under-the-radar inmates like Norma and Chang; Alex has been one of the main focuses from the beginning. Frankly, I found most of it to be rather boring and predictable. Yes, we realize that Alex most likely got involved even further in the drug dealing business after breaking up with Piper.

Despite the boring flashback, the ending of the episode is extremely intense. Regardless of how you feel about Alex, you can’t help but feel scared for her. Yes, I’m aware that feeling scared for a fictional character is pretty insane, but oh well, it is what it is. At the end of the episode, we learn that Lolly, who Alex has become increasingly suspicious of, is tracking Alex’s every move. The moment we see Lolly scribble her every move in her little journal, we finally understand that Alex was right to be paranoid. Ultimately, I think it was a good idea to focus on Alex, even though I would have rather seen a new story instead of just building on an old one.

What do you guys think about this episode? How do you feel about Alex? Let me know all your thoughts by commenting. I’ll be back here tomorrow with a review for episode nine.