This is an awesome episode, mostly about faith and the different types that the girls have found in and out of the prison walls. MCC decides to bring in rabbis to interview all the inmates who are claiming that they are Jewish seemingly to receive Kosher meals instead of the horrifying cafeteria food. The funniest moment comes from black Cindy, who picks up all she knows about being Jewish from Yentl and Annie Hall.

As the girls claiming to be Jewish fail at answering the rabbi’s questions, some of the other girls continue to believe in the miracles of Norma. It’s a lot like a cult, more or less resembling the one Norma herself was apart of. Anyway, Leanne decides to take charge of this so-called religion and order the others around by making them follow a bunch of rules. Soso instantly rebels, leading a war to go down between the pair. 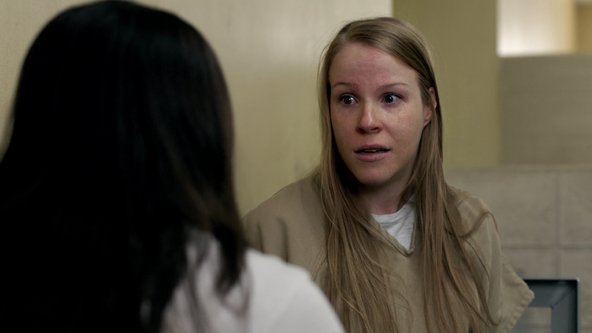 As the other girls are finding faith, Piper is pretty much losing it. She’s so caught up in the panty business and she’s also seen less and less of her girlfriend. Instead, she spends time with Stella. And although I don’t really blame her, it doesn’t make sense that she’d forget about Alex that quickly. These things take more time to develop, and Orange Is the New Black fails to do that effectively. Piper cheats on Alex with Stella and rationalizes it by saying that Alex is being “annoying.” Wow, that’s such a great reason to completely cheat on your significant other! Note the heavy sarcasm. Before we get back to talking about Soso vs. Leanne and Leanne’s flashback, let’s talk about Sophia and Gloria. Sophia has previously confronted Gloria about her son Benny being a bad influence on  Sophia’s son Michael. This episode, Sophia learns that Michael was arrested for beating up a kid just for looking at him funny. Sophia’s first reaction is to ask if Benny was involved in the situation, and Michael responds by saying that Benny was a punk and ran away. This comes to a shock to Sophia, who clearly misjudged the boy. Despite being aware that Michael was the bad one, she doesn’t apologize to Gloria for reasons unknown. I think part of the reason is due to pride; Sophia was in the wrong, and she can’t handle the fact that not being home with Michael is taking a toll on his behavior.

A storyline that makes me uneasy is the relationship between new guard Coates and Pennsatucky. I’ve liked Pennsatucky this season; I think she’s developing as a character. I also sense the aggressiveness in his actions, regardless of how playful and innocent he tries to act around our girl Tiff. Anyway, it’s going to be interesting to see where this storyline goes from here.

Getting back to Soso, she and Leanne clash. In the funniest moment of the show, Leanne tries to apologize to Soso and tells her that she gets controlling about rules due to her past and alludes that she’s Amish. Soso begins laughing at the thought of seeing Leanne in a bonnet, and her roommate Chang delivers the funniest line of the episode, “You churn butter. You Harrison Ford in Witness. You a weirdo.”

Yes, it’s true, Leanne was Amish in her past life. When we first are introduced to her in the flashback, we see her dressed in normal clothes, drug dealing at a party with a bunch of other teenagers. Leanne then slips back and dresses in her traditional Amish clothes, returning from her rumspringa. She then is baptized and accepted into the Amish community. Unfortunately, Leanne can’t completely escape her past and her actions during the rumspringa cause the police to ask her to wear a wire and rat out her friends who used to be Amish and turned their backs on it. Once she returns, the families of the kids she ratted out disown her. Leanne then hears her parents talking about what a burden she is and how none of the families forgive her for her actions. Knowing that her own community doesn’t want her, she turns her back on them and doesn’t return. Anyway, this is relevant because it shows us some perspective and reasoning behind her treatment towards Soso. I don’t believe her actions are justified because she’s just a totally rude human being to Soso and I don’t like it all. I also hate that Norma isn’t sticking up for Soso and is making her slip into an even deeper depression.

I think this was a great episode, one of the best of this season. What makes it so great is that it is cohesive and everything seems to have a deeper meaning to it. It also is an episode where a ton of character development, aside from Piper and the pretty pointless love triangle, takes place. Come back here tomorrow to catch my review of episode ten.