“We Can Be Heroes” is far from being my favorite episode of the season. However, I think it’s still a necessary one. Getting to see more about Joe Caputo’s past helps us to understand some of his actions. He truly believes that he’s doing the right thing even when it’s obvious to everyone else that what he is doing is wrong. This whole episode seems to revolve around the theme of being a hero and also when you’re on the other side of things and come up short. 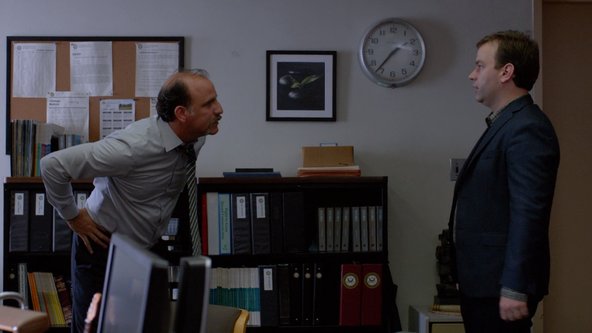 Piper gets a little too invested in running her panty business. She’s thrown for a loop when Flaca learns about unions and informs the other girls about demanding a fair pay. Piper doesn’t like the fact that Flaca showed her up and so to punish her, she embarrasses her in front of everyone by firing her from the business and not paying her. Piper thinks she’s the coolest person ever for doing this, but Alex is disgusted. In fact, her being a jerk to Flaca is what really ends their relationship, instead of the fact that Piper is sneaking around with Stella. It doesn’t make sense to me why this would be the one thing that makes Alex give up on Piper.

This episode picks up where the last one left off involving the Pennsatucky and Coates storyline. Big Boo notices that Tiffany is not acting like herself and doesn’t want to go around him at all when she used to look forward to it. Big Boo then sees the bruises and instantly makes the connection. Pennsatucky immediately backs away and blames herself by claiming that she wanted it, that it was her that led him on. Later, her friend hits her with some tough love by egging her on until she fights back and admits that she said no and that she just wanted for it to stop. This is a heartbreaking yet painfully real moment, and Taryn Manning has done an amazing job this season. This is definitely my favorite friendship so far throughout the past three seasons.

In the first flashback, we see a young Caputo volunteering to wrestle a special needs kid, which then results in an injury that ends Joe’s career. This shows us that Caputo is the guy who always wants to do the right thing, it just doesn’t always work out in his favor. An old girlfriend sums it up best with, “You shouldn’t spend your life opening up doors for people and get angry when they don’t thank you.” In short: why do something if all you want is recognition?

This episode had a few memorable moments, but was mostly unremarkable and forgettable. I hope that things become a little more fast-paced in these last two episodes. Anyway, I’ll be back here tomorrow to review episode 12, so come back!

0 0 0
Previous ArticleVideo Game Review: 'Tales from the Borderlands,' Episode 3 "Catch A Ride"
Next ArticleRead of the Week: 'Joyride' by Anna Banks