As you’d naturally expect from a season finale, there’s a lot going on in this episode. It picks up exactly where the last episode left off, in the middle of movie night. The structure of this episode is the same as the first episode, “Mother’s Day.” The flashback revolves around one theme and many different characters at various ages. The theme this time is religion instead of mothers, which is an appropriate way to wrap up the season, since this has been a frequent theme during previous episodes.

This theme is initially explored with Soso’s mother telling her when she was only a child that there is no heaven or hell. We also get to see Black Cindy’s father saying she’d go to hell if she acts defiant, Big Boo having a near death experience and seeing nothing, and Healy getting puked on by a homeless man who looks like Jesus.

Going back to the stories in the present tense, Poussey finds Soso’s “dead” body in the library and quickly runs and gets Taystee from movie night. Suzanne begins shouting “dead body, dead body” and accompanies the two. Taystee tells them that she isn’t dead but they have to take her to the bathroom and force her to throw up all the pills she swallowed. The girls take Soso under their wing so she won’t be forced to go to the SHU for her suicide attempt.

However, that doesn’t stop an angry Poussey from yelling at Norma. She tells her that Soso tried to kill herself because of this cult. She tells Norma that she was supposed to be good and kind, but it turns out she really isn’t as great as everyone thought. Despite the confrontation from Poussey, Leanne still just doesn’t get it. She believes that Norma is some kind of healer, although the so-called miracles she’s performed were far from being actual miracles. Norma finally wakes up and seems to realize that this group (aka cult) is sincerely wrong, and she calls it off.

The new Maratha Stewart character of the prison named Judy King ends up turning herself in at Litchfield. Poussey is going to be stoked to find her girl Judy King at the prison next season. I’m thinking that this character will probably end up being competition for Red in the kitchen. What began as a way to receive kosher meals turns out to mean much more to the hilarious Black Cindy. She has been studying the religion with some real Jewish inmates, and she meets with the rabbi yet again to truly convert. With help from her new Jewish friends and Cindy’s own sentimental speech, the rabbi allows her to become Jewish. However, her complete transition can’t be completed without mikvah, a baptism that requires a lake.

Pennsatucky ends up getting out of van duty with help from Boo, who teaches her how to fake a seizure as she crashes the van. The sad part is that yet another inmate is going to take over and be Coates’ new victim.

Piper gets a rude awakening when all of her money made off of the underwear goes missing. She immediately points the finger at Flaca, only to feel stupid when she realizes it actually isn’t her. Stella is the one who stole it, because she’s getting out in a few weeks and was scared about having no money. Piper gets revenge by putting all the contraband she could find in Stella’s bunk right before she was getting ready to leave, causing her to go to Max. Piper then flashes the “Trust No Bitch” tattoo Stella gave her, proving that she was the one who betrayed her.

One of the other events that goes down this episode is the prison getting smaller beds to make room for all the new inmates that are coming. Another important thing to note is Caputo not focusing on getting Sophia out of the SHU. Aleida’s “life partner” Caesar’s house was taken over by child services, and all of the children, including Daya’s newborn, were taken away. Perhaps Bennett is the reason behind this? Morello gets married to Vinny, while Red and Healy seem to be into each other, but no official moves have been initiated yet.

The most shocking twist is that Alex comes face to face with Kubra, the guy she’s been terrified of this entire season. He ends up at the prison by getting a job as a guard. They obviously leave this cliffhanger to make us think that he’s going to kill her, but I’m hoping that Chang will bust in there and save Alex.

The last scene is extremely beautiful, and it allows us to take our minds off of everything that’s currently up in the air and just enjoy freedom with the inmates. The girls spot a lake that’s just beyond the fence, and they go for a swim. They aren’t trying to escape; they know there is nowhere to go. They all want to be out there in the water so they can pretend for a few minutes that they have freedom like anybody else. Black Cindy finally is made Jewish officially when she has her mikvah. The other inmates who have been feuding ultimately make amends while using few words. It’s definitely one of the best scenes we’ve seen so far throughout these three seasons. 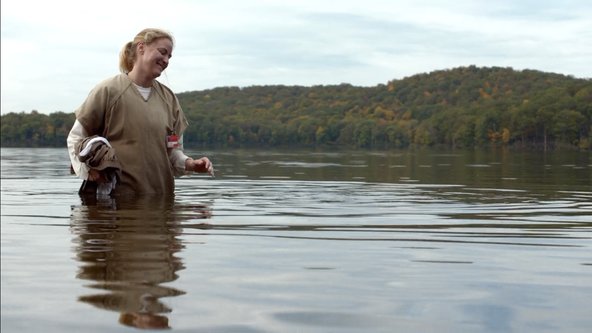