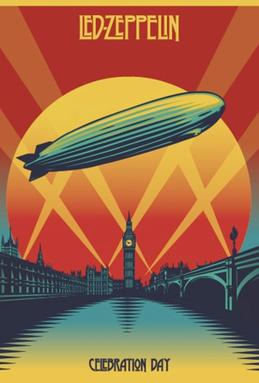 For those of you who have been living under a rock for the past 40 years, let me give you a little history lesson.   LED ZEPPELIN IS THE GREATEST BAND IN THE HISTORY OF ROCK & ROLL.  True, I may be a bit biased but let’s be honest who isn’t biased when it comes to their favorite actor, musician, cereal etc.

Unfortunately for me, and for many other fans, I have never been able to see Led Zeppelin perform live due to the fact that they disbanded before I was even born.  The band did reunite for a concert in London’s O2 arena in 2007 to honor Atlantic Records founder Ahmet Ertegun but considering that I was about 16 at the time it was virtually impossible to fly across an ocean and be back in time for Social Studies class. So I considered it a fantastic surprise to find out – 5 years later- that the historic reunion was recorded and turned into a concert documentary.

It’s safe to say that my friend and I were one the youngest people in the theatre; we were also one of the few females in the theatre as well. But all that was irrelevant, we were amongst fellow fans. And what a rowdy group of fans they were, within the first five minutes of the film a few hardcore fans demanded that they turn the volume up. Which was an appropriate reaction, I mean if you’re going to watch a documentary about a rock concert you need to turn the volume up so high that you can’t even hear your own thoughts. After a few more complaints about the volume we finally got the volume to what we all wanted- loud, good and loud.

Starting off with a ground shaking rendition of “Good Times Bad Times” and finishing up the show with a heart-pounding, head-banging “Rock and Roll” the band proved that they still had what it takes to be called the greatest rock band in history. There was such a sense of camaraderie between the three original members and their newest addition, son of late drummer John Bonham, Jason Bonham. Watching the concert you could tell that that these men enjoyed what they were doing. They were putting on a show for each other as much as they were putting on a show for the audience. This isn’t a band that has become sour and bitter with fame. This is a band that is proud of their work and loves performing.

And while lead singer (and wicked harmonica player) , Robert Plant, can no longer hit notes as easily as he did when he was younger, his stage presence and persona is enough to give younger performers a run for their money. Jimmy Page (guitar) and John Paul Jones (bass, keyboard) prove that talent never ages or ever goes away. The two performed so flawlessly that it if you didn’t know any better you’d believe that they never disbanded and have been doing this continuously for the past few decades. The most heartwarming part of the whole film was Jason Bonham. While no one could ever replace the band’s original drummer, John Bonham; Jason puts his blood, sweat, and tears to make his father proud while banging a long to all the classics. It was obvious that Paige, Plant, and Jones appreciated his efforts and cared for Jason. Plant even shared with the audience a sweet story about Jason when he was a kid. It was clear that they adored Jason and that they also adored his father, John Bonham, who was taken from this world so soon.

When it came to the directing side of the film, director the of documentary Dick Carruthers did an good job of splicing together actual concert footage with fan footage, along with throwing in some tearful fan reactions.  The only thing that bothered me was that sometimes Carruthers would throw in these awful Instagram-type filters that made everything start to look like a freshman film student’s final project. But I can forgive the awful filters for the wonderful shots of the band members being playful with each other as they rocked the O2 arena.

Although Celebration Day was only in theatres for two nights, it does come out on DVD/Blu-Ray/Digital Copy on Nov. 9th. My recommendation is that if you’re a Led Zeppelin fan you should definitely buy Celebration Day and turn the speakers only your TV all the way up to enjoy this fab four in our their glory.

“Nobody’s Fault but Mine”

“Since I’ve Been Lovin’ You”

“The Song Remains the Same”