What would Hollywood be without some inner-bandlationship scandals every now and then? Not half as interesting, obviously. In no particular order, really, I’ve put together a list of our couples that managed to stick it through and others that just couldn’t take the heat. 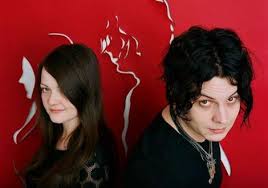 1. Jack and Meg White(The White Stripes) : These nifty two got away with covering up their previous marriage and making it out to look like they were actually just brother and sister. After tricking most of the press world, rumors started to swarm and in no time the cat was out of the bag : not incest, just exes.  They then proclaimed themselves as best friends and Meg White even got remarried to Jackson Smith in Jack White’s backyard. . The White Stripes continued just until early 2011, when very vaguely they announced the end of the band, as well as any future recordings.

2. Emily Haines and James Shaw(Metric) : Before there was Metric, it was just Emily and James, two musicians who were good friends with the guys from Stars and roommates with members of the Yeah,Yeah,Yeahs and Liars. Their affair may have been longtime or short-term  but it was never actually made public as to whether their relationship eventually ended or not. Most people assume they’ve split and still run the band together, while others speculate an on-and-off relationship is in the works.

3. Johnny Cash and June Carter : After their marriage in 1968, Carter took on Cash’s last name and the two went on to tour together and in time won multiple Grammy Awards. They were married for around thirty-five years before June passed away in 2003 and Cash went on to follow her less than half a year later.

4. Deborah Harry and Chris Stein(Blondie) : They were an item from the early 70’s into the next decade. In the mid-80’s, Chris fell ill with phemphigus, an autoimmune skin disease, and Deborah took several years off from touring with the band all so that she could nurse him back to health. In 1898 the two parted ways but continued to record together.

5. Thurston Moore and Kim Gordon(Sonic Youth) : and Kim played in numerous bands together including none other than Sonic Youth, which they founded in 1981. Three years after playing they married and up until their split in October of 2011, the two were looked upon as something of a rock-legend couple. Lucky for us, though, Sonic Youth is still up and running to date after over thirty years.

6. Ike and Tina Turner :These two battled drug addiction and abuse, both things that led to their later divorce in 1978. After going their separate ways, they were inducted into the Rock N’ Roll Hall of Fame jointly sometime in 1991.

7. Glen Hansard and Markéta Irglová(The Swell Season) :Behind the scenes of 2007’s Once, a love bloomed between these two in the short time on set. It’s not exactly clear when the couple went their own ways, but sometime after The Swell Season stayed and went forth to create a followup album before musically parting. Not too soon after Glen and Marketa began solo touring was Irglova’s marriage to Tim Iseler announced. Though Glen Hansard has come forward and spoken of the uncertainty and awkwardness the two still face, he reassures that that they’re are still close as can possibly be in their situation.

8. Gwen Stefani and Tony Kanal(No Doubt) :This early relationship between Stefani and No Doubt’s bassist died young, but to this day Gwen still writes songs about Tony, or so they say.

9. Stevie Nicks and Lindsey Buckingham(Fleetwood Mac) : Stevie and Lindsey never married, but when this pair called it quits, John McVie and Christine McVie – bassist and painist of FM – stepped on the bandwagon and divorced prior to the release of Rumours in 1976. And to add to that, even Mick Fleetwood filed for divorce, though his wife was never actually a member of the band.

10. Hannah Hooper and Christian Zucconi(Grouplove) : One of our newer couples out on the scene, Hooper and Zucconi started grouplove not too long ago in 2010. The two met prior to the band’s formation on the Lower East Side of Manhattan when Hooper overheard Zucconi playing and was instantaneously entranced. Less than a week later the two were packing their bags for a music retreat somewhere in Crete, where they then met the rest of the group. These two have been going strong long since then, and having had the pleasure of meeting them early on in August, I can say that the chemistry between them is very much there.