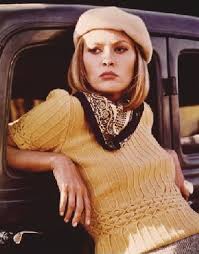 From start to finish, Bonnie and Clyde proves itself a vital part in the 1960’s movie revolution.

Two bank robbers on a quest to conquer the law and con it like it’s con them, the Barrow Gang made way for what would soon become a long following line of anti-heroes.

The film picks up around the time when Bonnie Parker is working as a waitress in the town’s local diner and crosses paths with the infamous Clyde Barrow. The two set forth to embark on a journey of criminality and are joined along the way by other wrongdoers who will later on make up the majority of the Barrow Gang, and all the excitement leads up to the final moments of Bonnie and Clyde’s life together as felons.

Faye Dunaway and Warren Beatty do excellent jobs as the notorious Depression era criminals, though the movie does stray away from the actuality of events in real life for a majority of the film regarding the con artists, but none the less the whereabouts of the Depression are accurately portrayed quite thoroughly.

Wardrobe and atmosphere throughout the film is kept simple and minimal to emphasize the Barrow Gang’s nomadism. We don’t see much of bright colors and this also adds to the reminder of the effects of the Great Depression and the toll it took on the country in the early 1930’s, and may even be seen as symbolism.

In the film, the real-life Bonnie Parker’s poem “The Story of Bonnie and Clyde” is depicted and read by Faye Dunaway’s character after releasing it to a local newspaper. The poem is lengthy yet extremely meaningful, as towards the end of Bonnie and Clyde’s criminality, both were being pinned for crimes they hadn’t committed as well as being exploited by media as more than they actually thought themselves to be. The poem gives us an insider view of the clan and what they might have seen themselves as, rather than the one-sided opinion of law abiders and what they imagined them as.

At the time that the movie was filmed, there hadn’t been any other forms of documentative entertainment surrounding the story of the two and not many movies were centered on criminals, none the less, made them out to seem like normal people. What I love about Bonnie and Clyde is that it gives viewers a sense of looking out from the inside. Not many films prior to were known for their villain sympathizing, and Bonnie and Clyde is known for just that. Getting to see what it may have been like for the two gives birth to a new emotion one may have not felt before looking at things from the point of view of a criminal and really just puts things into perspective.

All in all, Bonnie and Clyde is a fun watch that while is historically informative, is more than enjoyable.