Read of the Week: This is What Happy Looks Like by Jennifer E. Smith 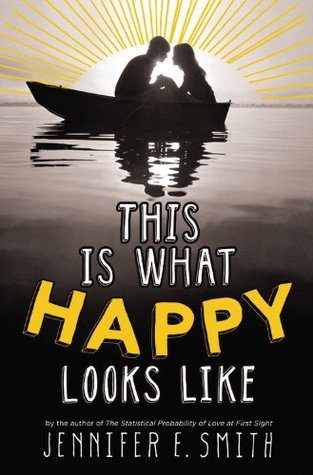 If fate sent you an email, would you answer?When teenage movie star Graham Larkin accidentally sends small town girl Ellie O’Neill an email about his pet pig, the two seventeen-year-olds strike up a witty and unforgettable correspondence, discussing everything under the sun, except for their names or backgrounds.
Then Graham finds out that Ellie’s Maine hometown is the perfect location for his latest film, and he decides to take their relationship from online to in-person. But can a star as famous as Graham really start a relationship with an ordinary girl like Ellie? And why does Ellie want to avoid the media’s spotlight at all costs?

With summer so close, I picked the perfect time to read Jennifer Smith’s latest. Set up in a small beach town in Middle-Of-Nowhere Maine, This is What Happy Looks Like centers Ellie O-Niell, poor girl and official nobody, and her total opposite(or maybe not), Graham Larkin, equivalent of Zac Efron and Hollywood somebody. The two begin talking after an accidental email switch-up and it isn’t long before the two hit it up virtually. When Ellie’s slips out that she lives in Henley, Maine, Graham takes the opportunity to suggest shooting scenes for his latest film in the little town, and before he knows it, he’s on his way to meet a girl whose name he isn’t exactly sure of and knows just about everything and nothing about. The story line is cute and quirky, and I loved the use of today’s technology, because the idea of a mistakenly typed email address doesn’t sound too far fetched from real life.

I absolutely adored the chemistry between Ellie and Graham. The only explanation for their story has to be fate and I love how that was so strongly incorporated into the novel. The thought that celebrity teens might not be that different from your average Joe is something to think about and I liked how despite coming from two completely different worlds, Ellie and Graham managed to find relatable grounds to connect on.

The family issues in Happy are there on both sides of the equation, and I loved that Jennifer made the story more than just about the romance. While Ellie only has daddy drama, Graham has troubles both ways and it was nice to see how they helped each other conquer their parental fears, so to speak. While serious at times, there was equal amounts of humor and it felt like the perfect equilibrium, similar to Jennifer’s past works(The Statistical Probability of Love at First Sight, You Are Here).

Readers are left with a bittersweet ending, and while not everything is concluded, there is a sense of resolve. Even though I might have preferred a happier ending that may have given a clue into Graham and Ellie’s future, the ending suited the situation well in the case it were to happen in a real life instance. It was played out realistically as possible and that’s something I respected.

Henley, Maine is just the kind of fantasy beach town anyone can ever hope for, and with summer right around the corner, I wouldn’t recommend This is What Happy Looks Like for any other time.

Vague plans have been released for Smith’s next YA contemporary, The Geography of Us, which will focus on a black out in New York City that leads to a coincidental meet up of two teenagers and is set for a April, 2014 release date. If it’s anything like Jennifer’s recent works, then I know there’s plenty of reason to be excited.