In Faking It’s second episode, one could only hope that its sophomore season would not start to slip into the pitfalls brought with the Second Episode Curse: all the exposition executed in its season premiere would go to complete waste by mid-season. However, while that fails to be the case for Faking It, it doesn’t have the nail-biting oomph brought by its first episode. Yes, Amy is still bent on keeping her Liam-sized secret; Lauren is still bitchy; and Karma is still hopelessly romantic Karma, completely oblivious to the clear tension Amy is trying to grapple with. However, this week presents a new character that somewhat disrupts the (adorable) gay-straight relationship foil between Shane and Liam, thus presenting further conflict that will become potential story arcs for this season.

First and foremost, I have to discuss Lauren’s character. Of course, she’s the character you love to hate: she knows she’s popular, able to manipulate others, and she’s beautiful. What initially bothered me about Lauren’s character was her almost borderline Mary Sue personality (with exception to her meanness) that made her a completely unrelatable character. But now she is recompensed by actually displaying emotions that go beyond being relentlessly mean, and, to some extent, through her own internal frustration of being treated as an outsider. After overhearing Karma and Amy talk about her, for once–finally!–Lauren displays an actually genuine response after realizing she was a third wheel.  Okay, yes, she was sad, but it was nice seeing more emotion from her that didn’t come off as overtly tactful. 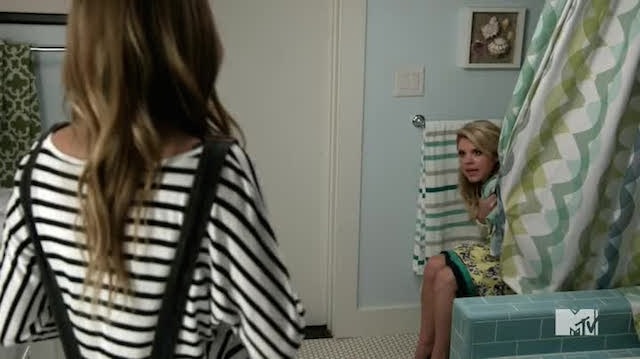 Thus, this brings me to what the majority of the episode focuses on: Karma and Amy’s sleepover. There were no huge revelations in Karma and Amy’s relationship this week–albeit, Amy was left in near-tears after a rather aggressive game of Truth of Dare–that was truly worth dropping jaws for. Which is completely understandable, given this is the second episode. Viewers can get the vague sense that Faking It writers are saving the huge suspense for the latter half of the season to truly hook the viewers in; for now, however, Faking It seems to be dedicating its first few episodes to rehashing the importance of old conflicts, while slightly adding on to them with new sub-plots. For example, Lauren is aware that Amy must have slept with Liam, just as Amy is aware that Lauren is on hormonal pills (in the last episode, she revealed she is Intersex), and both Amy and Lauren reach a mutual agreement not to spill the beans regarding their secrets. But again, in the likeness of the first season, viewers know that these characters “faking it” are bound to come out with the waterworks eventually–more or less, in the way everyone likes.

Meanwhile, a new character named Theo truly puts emphasis on how contradictory a character Liam can be. Liam tries so hard to be honest and pure that he’s hardly honest with himself, even to the extent of losing those who supported him in the process, like Shane. Since Liam and Theo have been clinging onto each other (especially given that this character didn’t even exist at all previously), Shane, like Lauren, is left feeling like the third wheel and alienated by them. (I mean, how could Liam ditch Shane for their planned Frozen Sing-Along?!). It’s clear that Liam might be moving closer to Theo out of the spite he feels for the situation with Amy, and he’s unsure of how to voice his repressed emotions–especially now that he and Amy are completely trying to avoid each other altogether, which just really adds the extra icing to the cake.

It might not capture the jaw-dropping moments of the season 2 premiere, but Faking It’s second episode still manages to be interesting, and has its funny moments in the quirky, satirical humor that the show does best. The road of drama that lay ahead for Amy, Karma, Liam, Shane, and Lauren is definitely worthwhile to see, and one can only hope that by season’s end it will live up to its promise of the unexpected.