Humans and Monsters once fought in a war. The Monsters were banished to the underground. However many years later, you play as a small child who falls to the dark, monster populated underworld. The only way for you to get home is to fight your way through all those who oppose until you reach the Barrier. Every monster you encounter, much like this journey itself, is not quite as they seems on the surface.

This game has been hyped to no end. Game players have flooded the internet with love for Undertale. The most interesting thing I’ve noticed in people’s endearing fervor is confusion about their feeling such passionate nostalgia for a video game they only played days before. How is this possible? People feel this longing for RPG games from 20 years ago like the early Final Fantasy entries and Earthbound. These are games with minimal stories, but have 100 hours of playability to have music and characters resonate so deeply in people’s minds. The fact that Undertale was able to make me feel this way after an initial 6 hour playthrough almost immediately (and incites me to play one more time for a more full experience) baffled me. It makes me wonder what it was that Boston native, Toby Fox, figured out when he began making a demo for his Kickstarter campaign two summers ago. If I’m allowed to make assumptions about someone else’s creative process, I think the secret is in the spirit of his presentation throughout Undertale, specifically in his characters.

Undertale is simple, and looks dated, but in doing so understands the roots of the genre it lovingly homages. The game achieves its power through decisive sprite animation, color work, witty writing and some of the most memorable and original music in a game heard for a very very long time. With all this bundled together, Undertale’s world of monsters feels like it comes to life, building an atmosphere that makes its attempts to tug at your emotions that much more effective.

Each monster character you meet, whether it’s a small little encounter blocking your path or seemingly impassible boss battles, give the chance to make you love them as equally as the rest. By the time you reach the game’s “proper” ending, you’ll have to have a heart of steel, or the game’s humor simply not strike a chord with you, for you to not realize that you’re going to miss this strange cast that’s accompanied and befriended you on your way home. That being said, if you’ve never had an RPG game in your life, or don’t have any endearment for puns or internet humor, the game’s self-referential nature about each of those categories is very prominent throughout.

The game certainly has its striking moments of intensity that can shock people, but this is mainly the case when it becomes “meta” and plays with any expectations you may have of what will happen in combat, or in story, based on previous games in the genre you’ve played before. More often than not, however, the game tries to give you light chuckles and occasional tear jerker moments in characterizing its cast. In fact, I was significantly annoyed at first when I was told I needed to play through yet again to ultimately reach the ending I thought I earned, but considering the game’s brevity when not stopping to smell flowers, the new relationships I achieved when I ensured that no characters died made my second journey worthwhile. Being so largely focused on building the story and the characters, those looking for gameplay with challenge and strategic turn based combat may not find what they’re looking for in Undertale, however, those who like to get engrossed in lore may be in for a surprise by the gameplay presented here for several reasons. Firstly, the game features multiple endings and resulting relations with the monsters. Without divulging too much, it is because there are several ways to get through every battle in the game. You can simply battle your way through and kill the monsters, or you can try to find a way to get these creatures what they want, or realize the errors of their ways and “SPARE” them. The game is the most rewarding when you are able to accomplish the latter in every encounter, and that is where Undertale cleverly separates itself from decades of games before, by allowing the player to complete their journey through pacifism.

In addition, every battle keeps you on your toes when you’re forced to defend yourself from oncoming attacks. Every monster’s attacks against you are different from the last, and can feel as simple as a WarioWare minigame, or as complex as a bullet hell shooter like Space Invaders. Outside of combat, the game presents you with puzzles to get through in each environment, but they’re either for the purpose of humor or  to keep you from speeding through an environment too quickly. Ultimately, any point at which the game appears to put you in a dire situation, the game only requires you to keep trying until you can dodge all attacks until the death or surrender of your foes. The game quite literally refers to this strategy as “determination,” encouraging you to keep your spirit up and trying again each time you get a Game Over. 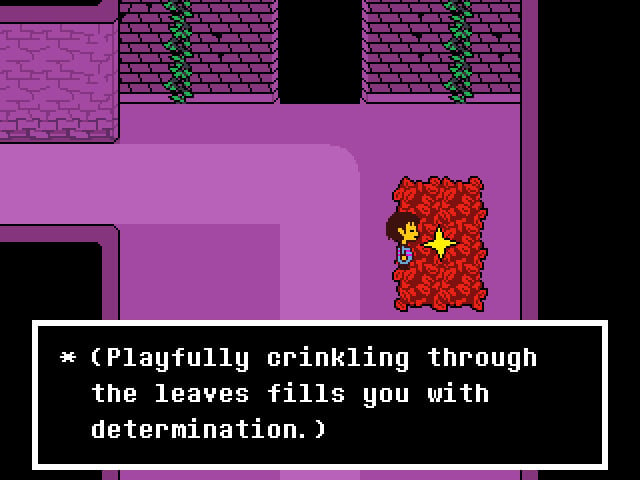 Undertale builds atmosphere unlike any game I’ve seen in some time, and considering how many games exist today that encourage multiple playthroughs to see whats happens differently, Undertale makes its request to play one more time an integral piece of its larger storytelling ideas. I don’t think it is by coincidence for a game that is all about the power of human soul to turn out the way this did. I feel that if made by other people, or a large crew, Undertale would be an entirely different game. It is quite literally the soul of Toby Fox and his company that makes Undertale the experience that it is: in its art, in its humor and in its message. This is the kind of game that exemplifies the creativity of individuals and what kind of change that creativity can bring to any industry.

Buy the game and its soundtrack at:

0 0 0
Previous ArticleBest Gadgets To Enhance Gaming
Next ArticleThe Evolution of Bond: How Times Have Changed