Homeland enters their eagerly awaited second season with an uphill battle ahead of them with their first season gaining a multitude of accolades. Last season ended with Carrie undergoing shock therapy just as she had remembered the name Isa, Brody deciding to infiltrate the government from the inside rather than a violent attack, he would rather influence than destroy. This show can be unimaginably gripping, with moments that keep viewers eyes glued to the screen. After last season it’s difficult to imagine how they can keep the momentum up. However, after the premiere episode­­­­, they’re certainly off to a promising start.

The episode begins with Carrie at her sister’s place, trying to readjust to life after being fired from the CIA. She’s attempting stillness; she’s gardening, she’s trying to be at peace. She now works as a teacher for English as a second language. She’s finally on her way to being healthy after too much time stuck in emotional chaos. Claire Danes is great as always, knowing when to reign it in, allowing viewers to see the emotional trauma that Carrie has been through in the past few months without succumbing to overacting. Danes is great at the ticks and facial expressions that make Carrie such an interesting character, she never stops moving, she never stops thinking and analyzing and it’s written all over her face.

The peace is short lived once she gets a call from Saul telling her that she is needed by David Estes to assist on a mission of high importance. She is indignant, angry at Estes confronting her after the humiliation she was inflicted to at his hands. He tells her that the lead they have will only speak to her and that the lead has information about a potential attack on America. Carrie knows the woman of question, having hired her back in Beirut in 2005 as one of her personal assets. Carrie agrees to the trip. Her sister argues against it, fearing a relapse but she’s dead set, saying she really has no other choice, but we all know that she does. Carrie may be good at playing happy, and sure her mind is in a safer place at home amongst her family who understand what she’s going through, but nothing quells her sense of accomplishment as much as being on the tail of a lead, or of being back on the case.

Brody, meanwhile, is on his way to furthering his goals in congress. He has a meeting with the current Vice President who tells him he’s thinking of throwing his, Brody’s, name in the ring as a possible running mate, to stir the media a bit. Firstly though, he wants to know if there’s anything that Brody has hidden that he should know about. Brody plays the dutiful, humble soldier to a T, not allowing even momentary panic to show through. Damian Lewis is on top form as always, keeping his characters hidden motivations as secret as Brody himself, a master of subtlety.

Back at home his family is reaping the benefits of a family member in congress. The problem that this show has always had though is its glaring inability to keep the same quality in the home scenes with Brody as the rest of the show. Morena Baccarin, who plays Jessica, is a very capable actress, but it doesn’t matter if the scenes she’s in drag so much that as a viewer I’m sitting, willing the show to move on back to the more interesting plot lines.

Brody has a meeting with a mysterious woman who has a message from Abu Nazir, telling Brody that Isa’s birthday is coming up; he would’ve been fifteen if he were still alive. Nazir wants Brody to honor his commitment and break into Estes safe in order to obtain targets. Nair wants to attack America. Brody wishes to simply influence the government, like he decided to last season after the failed bombing, but out of loyalty goes along with the plans. 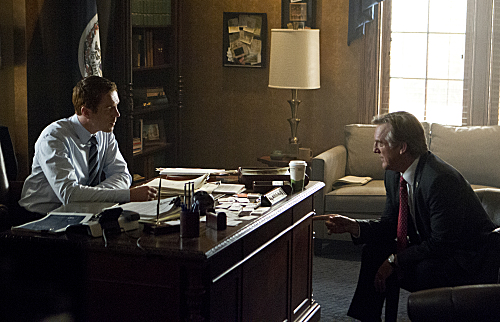 Due to a fight Dana has at her new school, Brody is forced to tell Jessica that he is in fact a practicing Muslim and goes out to the garage every night for some solace and a place to pray. At first it seems that Jessica is angry purely because of the fact that he’s been lying to her, but then her words turn vicious, using this admission as a reason to call back Carrie’s words, when she had called him a terrorist on their doorstep. In Jessica’s eyes all she sees is stereotypes when it comes to the Muslim religion, so it condemns him in her eyes. However, I believe it was mainly the fragility she felt after being lied to, when Dana knew the truth, that is the main reason for her hostility.

Carrie is flown over to Beirut and is given an alias to go undercover with.  She at first is stressed, feels out of control, and is uncertain about her capability to handle the case. She is then however, in route to meet Saul, when things begin to click. They realize that a man is tailing her and she tries to evade him, running into busy market place to be hidden amongst the crowd. Once he finds her she gets away again with tricky maneuvering and as she walks away, successful, there is a self-satisfied smirk on her face, a look that is so overtly joyful that we realize our Carrie is back. Carrie wasn’t always on the road to a breakdown and before she was she was fearless, reckless, and very good at her job. This scene was tense, exciting and the highlight of the entire episode.

Back with Brody, he stands outside his house, with his desecrated Qur’an, and buries it out of a sign of respect. Dana appears at his side, offering to help. Dana and Brody have an interesting dynamic and I can never tell which way the head show runners are directing Dana. Is she growing suspicious of her father? Does she understand his feeling of displacement? Will the dynamic be given more time of exploration? We’ll see.

This was a very good start to a season. It brought back all of our regulars, introduced a new face, and jumpstarted the beginning plotline. What will the new planned attack entail, will Carrie work her way back to her old job? Or will she mainly work undercover. Will she and Brody interact again? I know I’m not the only fan that hopes so. The show did well by sustaining the suspense in this episode with multiple scenes; we’ll just have to see how long it manages to last.

No matter, I’m excited to see what this season will bring.

0 0 0 0
Previous ArticleBooks to Movies: Which of Your Favorite YA Reads Might/Will Hit the Big Screen?
Next ArticleMusic Review: Sticks & Stones by Cher Lloyd