After a brief hiatus, Empire has returned with even more jaw dropping moments for the audience in tonight’s show.

Last episode we saw Hakeem get kidnapped by three members of a local gang hell bent on destroying Lyon Dynasty. But as soon as the kidnapping happened, it ended. While the abrupt ending of the kidnapping was quick and to the point, the aftermath was anything but.

Hakeem suffers a traumatizing experience from three dudes with longhorn tattoos across their upper backs, and then a straight crack to the head from a gun. After a $40,000 drop for Hakeem’s safe return, an interesting and disturbing scene of Hakeem hooking up with Anika, it all ends up with Hakeem temporarily impaired of hearing and performing.

Which is obviously not good.

Hakeem’s three piece girl band is left on the back burner while the rapper succumbs to the haunted and distorted memories of his traumatizing experience. It’s clear from this episode that Hakeem has come into his own fully and completely despite the knock to the head.

While Hakeem fights his own head space, Jamal is in the studio with Lucious. Struggling with the image Empire has created for him (“gay artist”), the middle Lyon sets out to find help of his own. After being rejected by Staples Center for a show, Jamal reaches out for help from Jameson Hinthrope (William Fichtner), who has history with Lucious Lyon himself. It’s made clear that tension is thick between the two rich moguls, but the writers don’t leave the suspense hanging for long (not a surprise). The two musical gurus go way back when Lucious found out Hinthrope was gay and refused to sign with him. The tension lingers, but as Jamal makes it a point to expand and find a way to put his newly heartbroken feelings in his music, the exchange is left “fixed.”

Not for long, I presume.

As for the oldest Lyon, Andre had a hilarious montage of an interview screening process this episode. Interviewing a few artists for the side label to Empire, Gutter Life Records, Andre presses forward with his newly found managing duties. A newly saved man and looking for artists that fit his religious perspective, Andre uncovers “J Poppa,” among a few others. Freda Gatz makes a brief appearance, but as Lucious so helpfully points out later: that’s Lucious’ artist.

J Poppa has his own duties to fulfill. At the beginning of the episode, we find the rapper lying on top of Becky. Yes, Becky. Lucious’s assistant. I am in love with the idea of Becky having a love interest and story line. Now I can only hope Porscha receives some of this opportunity as well.

During a night that can only be described as a “talent show,” J Poppa makes his big rapping debut. Using bible verses as lyrics.

Andre clearly has an influential presence in this rapper.

Another influential presence is Lucious with Freda Gatz. The two have developed a father-daughter bond that is as annoying as it is genius. Who knows where the writers will go with this one, but I can assume she has only just started her way up the Empire ladder.

Lyon Dynasty has already started to climb their way up in the hood. After receiving advice from Laz (Adam Rodriguez), Cookie makes it a point to plan a meeting with the kidnappers. Of course, at this point, Hakeem still isn’t in his right mind and we get a dose of what Cookie, who was once a drug dealer, can really do. With a gun cocked at the bald dudes head, and a snarl on her mouth, Cookie welcomes them to the neighborhood in the only way she knows how: “Welcome to my streets, bitch.”

As for Cookie and Laz, well. Let’s just say that big reveal was nothing I saw coming and everything I didn’t want. Will Cookie ever be able to date someone who we can trust? Is she going to always be forced to be single so the Lucious/Cookie story line can continue

? What was that tattoo and am I able to make an excuse for it?

I’m hoping all these questions can be answered within the next episode. But we’ve still got twelve to go and I’m not banking on it.

The episode starts to wrap up with a memorable scene between the three brothers before Hakeem takes the stage. After refusing a new song Lucious is working on, the two oldest brother’s band together to create a supportive environment for Hakeem backstage. After stepping out to feature on a track, Hakeem chokes against the onslaught of static. That is until his newly found love steps in and forces eye contact. Hakeem opens up to the extra support like a flower

to the sun and the show is a hit. 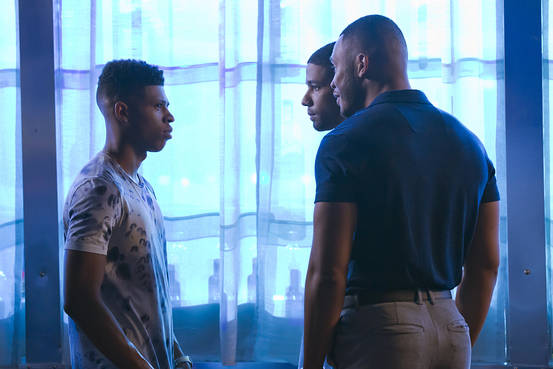 At the last of the episode we see Anika show up at Hakeem’s door step. Now, I’m usually always a fan of Anika but this desperation doesn’t sit right with me. Even the audience members who have never taken a liking to Anika at least felt a little sorry for her by the end of the episode. The shunning of boo boo kitty has upped it to a level where she’s crying in the streets and leaning on her ex-husbands son for comfort. A formal complaint is being stated now for this Anika/Hakeem relationship to end immediately.

Some highlights from this week’s episode:

Is it next Wednesday yet?

Tune in next week on FOX at 9/8c to watch Empire live.